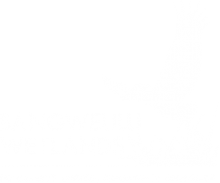 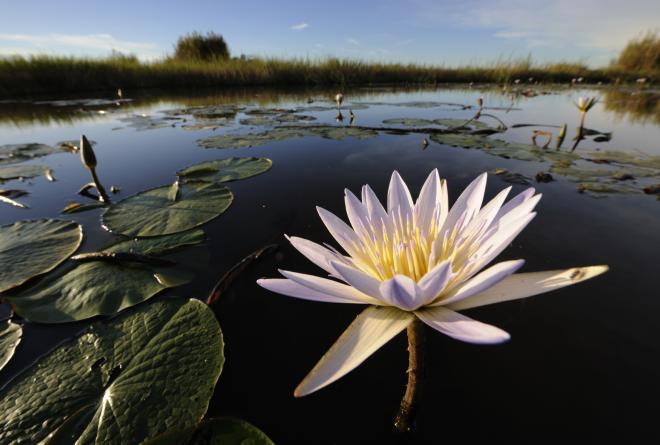 The Bangweulu Wetlands spread across 6,000 km2 of a 9,850 km2 region. The ecosystem consists of floodplains, seasonally flooded grasslands, miombo woodlands, and permanent swamps fed by the Chambeshi, Luapula, Lukulu, and Lulimala rivers. Swamp areas are dominated by extensive stands of Cyperus papyrus, floating grasses, and Phragmites reeds, which create a vast and lush wetland landscape.

Since African Parks assumed management of the park in 2008, populations of many species, including the iconic sitatunga, black lechwe and shoebill, have recovered. Translocations have repopulated areas that experienced depletions of wildlife: serval, puku, impala, zebra, buffalo and waterbuck have all been released into the wetlands in recent years.

Predators: Bangweulu is home to spotted hyaena, side-striped jackal, and serval. 2020 marked the historic return of the African cheetah, when three cheetahs were translocated to Bangweulu.

Herbivores: Bangweulu is home to a significant population of endemic black lechwe, which is listed as vulnerable on the IUCN Red List. The population has increased to about 36,600 today. In addition to black lechwe, mammal censuses have revealed healthy populations of sitatunga, southern reedbuck, tsessebe, and oribi. Hippopotamus are also found in the area.

Bangweulu is home to over 400 bird species, including 10% of the global wattled crane population and the endangered shoebill stork, both also listed as vulnerable. Other bird species include cormorants, ducks, egrets, geese, herons, ibises, pygmy geese, and waders. When it comes to smaller avian species, the highly specialised papyrus yellow warbler is considered vulnerable, and collared pratincoles, blue-throated bee-eaters, and several species of flufftails also find refuge in the wetlands.

Bangweulu’s unique avifauna has led to several international designations: Bangweulu is a “Wetlands of International Importance” under the RAMSAR Convention and an “Important Bird Area” under BirdLife International. 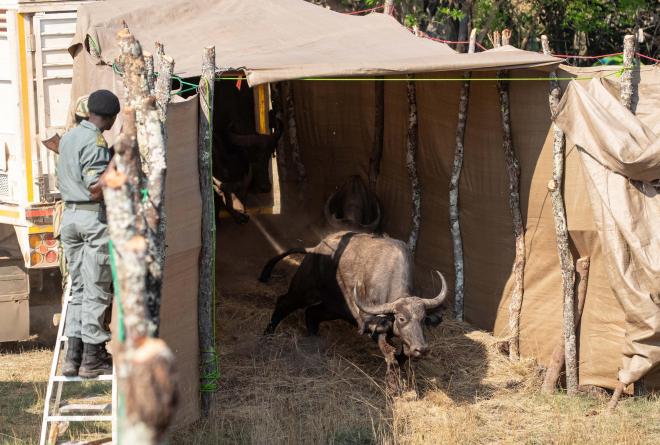 © Isak Pretorius
In 2019, 95 buffalo were translocated to Bangweulu.

Before African Parks took over Bangweulu’s management, heavy poaching decimated the park’s large mammals. Some species were completely wiped out, including lion, cheetah, and black rhino. Others clung on through small remnant populations, which have been bolstered by translocations. In 2017, 250 animals that included impala and zebra were released into the wetlands, and in 2019, we translocated 95 buffalo from South Luangwa National Park to increase genetic diversity in Bangweulu. In the future, once conditions become sufficiently favourable, we hope to restore the full suite of large mammal species to Bangweulu.

Conserving shoebill storks: Bangweulu is famous for its shoebill population, and several programmes have been implemented to conserve the enigmatic species. The Shoebill Guard Programme employs local fisherman to ensure the safety of shoebill nests, while researchers utilise camera traps to monitor the progress of eggs, chicks, and fledglings. Community cooperation and enhanced awareness have resulted in a marked improvement in the number of nests producing fledglings over the years.