Shoebill Conservation in Bangweulu - A Unique Solution for a Unique Bird

Bangweulu Wetlands in Zambia, is home to one of Africa’s most unique birds, the shoebill. But with growing pressure on their survival, this species has required a carefully thought-out and innovative approach to saving its kind. Our team in Bangweulu has launched a one-of-kind project – including rallying a little help from some Muppet friends - to ensure we don’t lose Bangweulu’s iconic shoebill.

Bangweulu Wetlands is made up of seasonal floodplains and swamplands dominated by extensive stands of papyrus, floating grasses and reeds, all creating a lush 6,000km2 wetland landscape. Not only does this unique and exceptional area provide a haven for wildlife, but it’s an ideal habitat for a rich diversity of birdlife, including the shoebill (Balaeniceps rex).

Known for their odd appearance, shoebills face myriad threats across their range in tropical central-eastern Africa, from South Sudan to Zambia. Today, there are no more than 8,000 birds left in the wild. Listed as Vulnerable on the IUCN Red List, their numbers are under continuous decline due to their slow breeding habits exacerbated by the illegal pet trade which targets their eggs and chicks, as well as hunting, nest disturbance and overall habitat loss. As a result, in Bangweulu Wetlands, the southernmost range for shoebills, only a few hundred individuals exist.

First of its kind 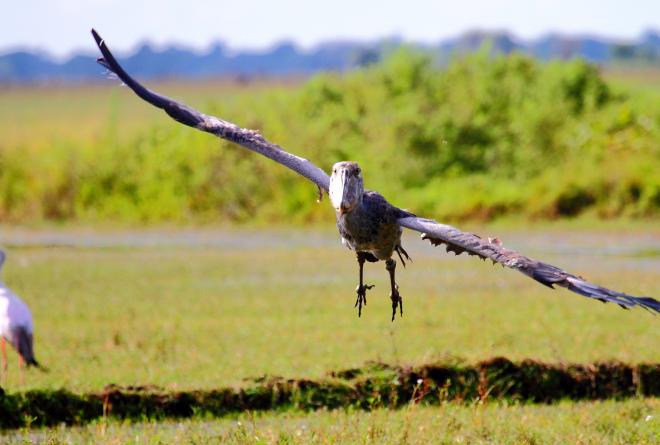 After assuming management of Bangweulu’s community-owned protected area in 2008, African Parks developed the Shoebill Nest Protection Programme in 2012, to ensure the protection of Bangweulu’s threatened shoebills. Through this programme, community members are employed as guardians to protect the Bangweulu shoebills on a 24-hour basis during peak nesting season between June and November. This year, 26 community members were employed for up to six months at a time to look after 13 nests and their inhabitants.

Following the initiation of the nest protection programme, African Parks, in partnership with Zambia’s Department of National Parks and Wildlife (DNPW), drafted a comprehensive Shoebill Management Plan to prioritise the conservation of this species. Highlighted in this Management Plan was a facility designed to rear chicks in captivity to increase breeding success in the Game Management Areas. Eight years later, the concept was finally realised. In May 2022, the Shoebill Captive Rearing and Rehabilitation Facility was established in the heart of Bangweulu Wetlands in collaboration with African Wildlife Conservation Foundation and Ashia Cheetah Conservation. The facility, which is the first of its kind in the world, has been installed with state-of-the art incubators and brooders to care for shoebill chicks at every stage of their development.

With this facility established and all chicks planned for release back into the region, it’s hoped that breeding success will increase and the overall conservation of shoebills within Bangweulu Wetlands will be enhanced. With only two known instances of shoebills being reared in captivity (one in Belgium and one in Florida, USA), this project is ground-breaking in learning more about the species and in the methods used to do so. 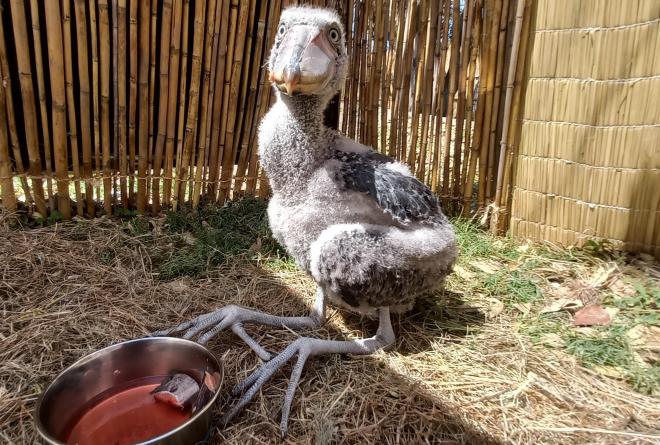 Shoebills are monogamous and each pair prefers to build its nest away from other birds. The female lays between one and three eggs at a time during breeding season (May to October in Zambia). Like many bird species, the older and bigger chick has a several-day head start and may outcompete its smaller sibling for food. These younger chicks are therefore an insurance policy or ‘spares’ in the event that the first chick dies.

However, the ‘spare’ chicks are equally genetically viable and just as valuable as the older sibling. It is this ‘back-up’ that has allowed Bangweulu’s shoebill experts to help grow the species’ numbers. By removing the second egg from each known nest in the wetlands, and raising the chick to adolescence in the rearing and rehabilitation facility, the chances of the shoebill chicks surviving is greatly improved.

The process to hatch and raise the chicks is broken into several key stages. First, the eggs are incubated, with carers turning each one by hand three times a day, until they hatch after roughly 30 days. The chicks are then kept in the Brooder Room for several weeks, where high temperature and humidity are maintained until their feathers have grown and they can thermoregulate for themselves.

Once they have sprouted a fluffy crop of feathers, the shoebill chicks are moved to nest boxes kept in the Chick Rearing Rooms. These are surrounded by papyrus mats to reduce visual contact with humans. Here they’ll stay for several more weeks until they are ready to move outdoors into the enclosures.

Finally, between January and March, when the youngsters are able to fly and catch their own fish, they are released into the wetlands. GPS-tracking units are attached to each one to monitor their progress as they integrate into the wild population. 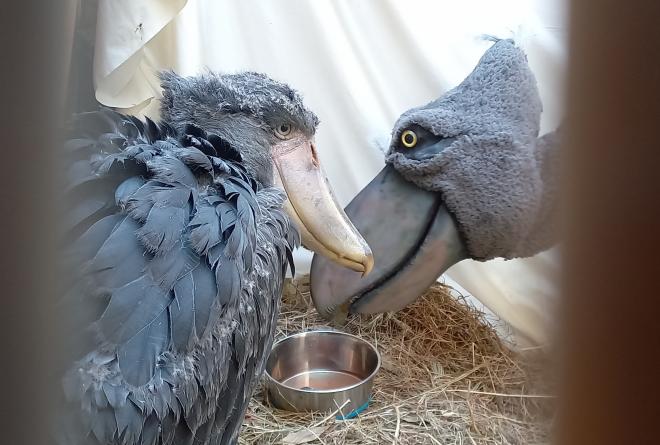 Each stage of the hand-raising process requires 24-hour care and supervision, but there is a catch: the birds must be raised without any human interaction.

Once hatched, chicks tend to ‘imprint’ or adopt the first live thing they see as their parent. To solve this problem so that the birds can be successfully released back into the wild, shoebill ‘parent’ hand puppets, designed and made by famed Muppets puppeteer, Bill Diamond, are used by the care-givers at every stage of the chicks’ growth. Recordings of shoebill vocalisations are also used to create a sense of natural environment while the chicks are feeding.

Currently, there are five chicks in the facility. Three were spares picked up from nests where there were two eggs. These chicks, and their siblings which remained in the wild, are healthy and growing well. The fourth chick was found with its wing feathers pulled out and showing signs of extreme stress. But after specialised attention and physiotherapy, this chick – named Hope – has recovered, settled down with the others, and regrown almost all of her missing feathers. The fifth and most recent chick incorporated into the programme, was confiscated from a fisherman who removed the chick from its nest. As a result of extreme malnourishment, the chick suffered two broken legs and had an infestation of intestinal parasites. Aptly named Lucky, this chick has now fully recovered and is standing tall.

Although still in early days, the Shoebill Captive Rearing and Rehabilitation Facility is already showing its value in conserving another of Africa’s threatened species. Every chick that is successfully raised and released is another chance for the long-term survival of the strange-looking, but important, shoebill. 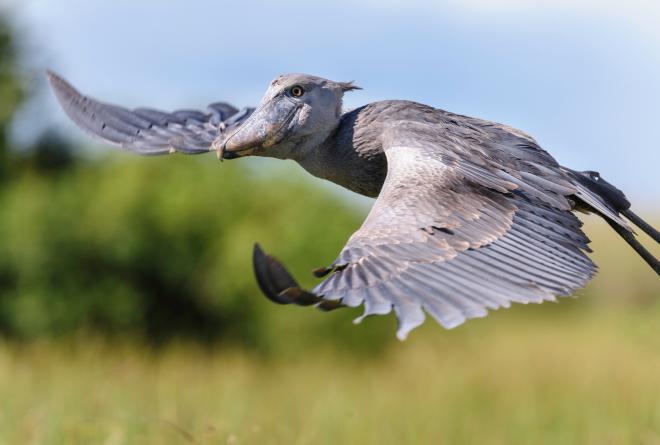 Family genetics
The shoebill is genetically closely related to the pelican and heron families.

Razor-sharp beak
The strange-looking shoebill has a beak that can reach up to approximately 24cm in length and 9cm in width. This enormous beak is used as a very precise fishing tool. The edges of the beak are razor sharp, and can decapitate a very large fish or even a baby crocodile.

Blue-eyed beauties
Some shoebills have exotic pale blue eyes that can be very striking.

Location specific
Found in Bangweulu Wetlands, shoebills also exist in small numbers in other marshy areas in South Sudan, Rwanda, Tanzania, DR Congo, and Uganda. Since they prefer to nest on papyrus platforms, their distribution usually coincides with the presence of papyrus-dominated swamps.

Insurance
Shoebills rarely raise more than one chick. The youngest chick is insurance in case the oldest one doesn’t survive. With limited food supply, parent shoebills typically favour the eldest, ensuring at least one of its offspring survives.

Bill clap
Shoebills are mainly silent but they do vocalise, especially when begging, feeding, or interacting with mates. In Zambia, the local name for shoebill is mapumambao meaning ‘the one who drums on wood’. Shoebills routinely communicate through clapping their bill at a fast speed. The resulting hollow sound resonates through their massive bill. Shoebill chicks in the Chick Rearing Facility have been recorded clapping their bills as young as three weeks old.