Terrestrial mammal species present in Iona include the South African oryx or gemsbok, springbok, and Hartmann’s mountain zebra, a threatened subspecies. Black rhino and elephant were extirpated from the park in the last century. Large carnivore species include cheetah, leopard, and brown hyaena but these are present in low numbers and are rarely seen.

Around 250 species of bird have been recorded in and around the park. This list includes the ostrich as well as several regional endemic and near-endemic species such as the Herero chat, Monteiro’s hornbill, and Damara tern. There are large coastal seabird roosts, including those of the endangered Cape cormorant.

Iona has a number of endemic reptiles which are specially adapted to the arid environment. At least 63 species have been recorded in the ecoregion, eight of which are strictly endemic. Herpetologists are currently surveying the area to better document the species and to supplement an Angolan reptile and amphibian atlas. 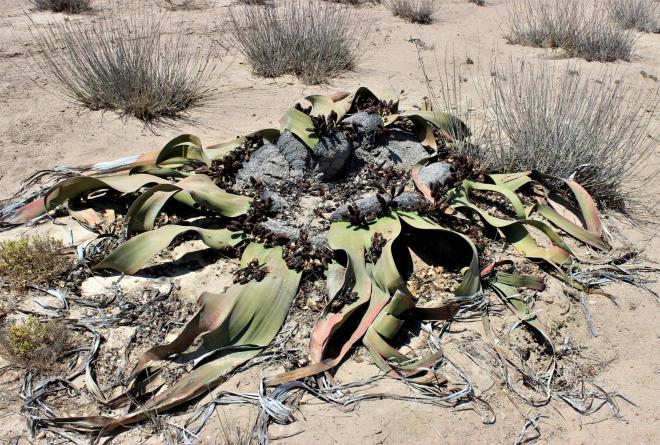 The Benguela Current in the Atlantic Ocean brings cold water to the surface which meets with the hot, dry air of the desert to form a dense fog. Throughout most of the year this fog is present each morning, dissipating with heat of the sun near midday. This fog provides live-saving moisture to specifically adapted plants, such as the !nara melon (Acanthosicyos horridus), and insects, particularly beetles, that have evolved to take in water through unusual means. These plants will take in moisture from the near-daily fog through its fleshy leaves and stems. The Namibian desert beetle has structures on its back that capture water droplets and funnel it down to their mouths.

The Welwitschia mirabilis plant is of particular interest in the park. This ‘living fossil’ is the only surviving genus of its family and is only found along this desert coastline. The oldest recorded living specimen of this species is over 1,000 years old with some estimations nearer 2,000.

The Cyphostemma currorii is also a special regional endemic plant, found in the rocky, mountainous areas of the park.