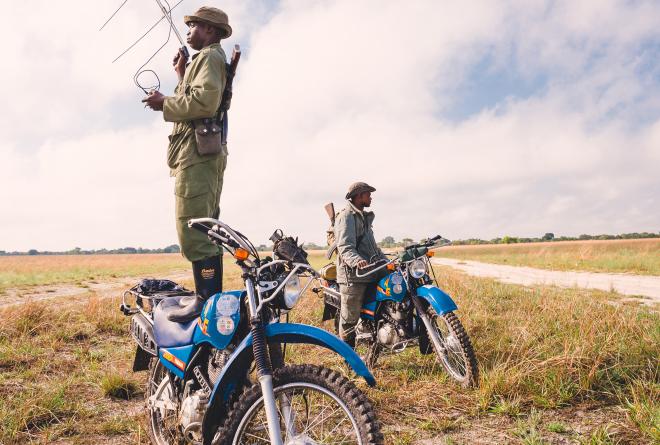 Johannesburg (South Africa): African Parks is proud to announce that seven of its rangers have been named winners of the 2019 African Ranger Awards. Daoba Dieudonne Komerewa of Garamba National Park in the Democratic Republic of the Congo, Benito Willie of Majete Wildlife Reserve in Malawi, Forment Kalaba Chisala of Bangweulu Wetlands in Zambia, Dari Narakoua and Juste Sokoutinde of Pendjari National Park in the Republic of Benin, Leonidas Mpumuje and Anthony Nzuki both of Akagera National Park in Rwanda were among fifty finalists selected from 17 countries across the continent. Established by the Alibaba Foundation, the Paradise International Foundation, and the Founder of Alibaba Jack Ma, the Awards recognize the rangers’ extraordinary contribution to the protection of Africa’s wildlife and conservation areas.

African Parks has the largest ranger team for any one NGO in Africa, with 1,000 rangers in nine countries working on the frontline to provide safety and security for the wildlife and people living in and around each of the fifteen parks under its management. “Effective law enforcement is critical to the long-term conservation of parks in Africa, which are the last islands of protection for most of the continent’s biodiversity. Rangers underpin our efforts to secure these areas from escalating global pressures, enabling people and wildlife to benefit from stable and ecologically functioning landscapes” Said Peter Fearnhead, CEO of African Parks. He continued, “The African Ranger Awards provide important recognition of the work that rangers carry out to protect the world’s natural heritage. We extend our congratulations to all of the award finalists and our sincere thanks to the Foundation and Jack Ma for honouring them”.

2019 marks the second session of the African Ranger Awards, a ten-year award programme which will be given annually by the Alibaba Foundation and the Paradise Foundation, a Chinese not-for-profit environmental conservation organization. The awards aim to illuminate the role of rangers in nature conservation and provide them with more financial support. An international panel of judges reviewed all the 115 entries based on their dedication, contribution, threats and challenges overcome, as well as leadership and inspiration. A ceremony will be held in November this year to honour the recipients.

Globally, over a thousand rangers lost their lives in the line of duty over the past ten years, while up to 25,000 carry out their work in the face of immense challenges. African Parks is fully responsible for the management of 15 parks it manages in partnership with governments, providing rigorous training and resourcing 1,000 rangers who help to secure 10.5 million hectares of land across the continent. In 2018 alone, the teams confiscated 59,200 illicit items, removed over 16,800 snares and effected over 790 arrests, and four African Parks’ rangers were recognized by the inaugural 2018 African Ranger Awards.

Daoba Dieudonne Komerewa, Brigadier Chief at Garamba National Park, DRC: Daoba Dieudonne Komerewa has served as a ranger in Garamba for 11 years. This park is situated in a challenging part of the region, historically targeted by several armed groups of poachers, and he has distinguished himself through his selfless duty and exemplary leadership. Despite being injured in a helicopter accident in 2015, he continues to lead his team of rangers with exemplary skill and dedication.

Benito Willie, Ranger at Majete Wildlife Reserve, Malawi: Benito Willie has been employed as a ranger in Majete since 2015. He is commended for having helped to save the life of a fellow ranger after being charged by a buffalo while on patrol in thick vegetation. His rapid reaction prevented traumatic injury to his colleagues, allowing the team to continue to operate. Being a ranger carries inherent risks, however, Benito has shown incredible courage and commitment in the field.

Forment Kalaba Chisala , Honorary Wildlife Police Officer at Bangweulu Wetlands, Zambia: Forment Kalaba Chisala has been working as a ranger for 32 years. Forment grew up fishing the wetlands with his father. After being apprehended for poaching in 1984, he was given the chance to join the ranger team to turn his life around. Despite challenges, Forment persevered as a ranger and has become a leader and mentor for junior rangers. His tenure as a wildlife police officer has seen poaching decrease and wildlife populations grow, including endangered species such as the shoebill and black lechwe.

Dari Narakoua, Special Brigade Group Leader at Pendjari National Park, Benin: Dari Narakoua has been a ranger for 19 years, starting out as an eco-guard for Benin’s National Wildlife Authority. He was the first ranger to join African Parks at the Pendjari Special Brigade. He is responsible for deploying logistics and overseeing the operations and control room. Dari overcame many physical and mental challenges in the transition from eco-guard to group leader in a new park management system and serves as a brilliant example to other rangers and community members.

Leonidas Mpumuje, Head Rhinoceros Monitor at Akagera National Park, Rwanda: Leonidas Mpumuje has worked as a ranger in Akagera for seven years. He has quickly progressed due to his eagerness and skills and was made head of the rhino monitoring team in 2017 for the initial reintroduction. Under his leadership, not a single rhino has been lost to illegal activities since their reintroduction. Leonidas has excelled in learning the skill of tracking, a regular duty in his job, and was chosen to attend training courses in Malawi and Zimbabwe to further his abilities.

Anthony Nzuki, Ranger Post Leader at Akagera National Park, Rwanda: Anthony Nzuki has been working in Akagera National Park for 15 years, the last nine of which were under African Parks’ management. Anthony is an instrumental part of the law enforcement team that helped to transform Akagera from a park with rampant poaching and minimal wildlife to the stabilised park it is today with reintroductions of rhino and lion. During his career, Anthony has also acted as a training assistant for rangers in Akagera and other parks in Rwanda.

Juste Sokoutinde, ranger at Pendjari National Park, Benin: Juste Sokoutinde has been a ranger in Benin for over 20 years and has efficiently contributed to the restoration of 10 protected areas in the country. He co-leads the Law Enforcement Brigade in Pendjari with passion and devotion, and provides others with a great example of leadership. When African Parks assumed management of Pendjari in 2017, Juste conducted the recruitment process and training of 101 rangers for the park's law enforcement strategy. He is an active member of the Benin Rangers Association and pushes for changes in strategy to support rangers in the long-term.

The progress achieved in improving the security and law enforcement efforts across the parks under management is thanks to our partnership with Governments and the support provided by the U.S. Department of State, International Narcotics and Law Enforcement, the Wildcat Foundation, Save the Elephants and Wildlife Conservation Network’s Elephant Crisis Fund.

About African Parks: African Parks is a non-profit conservation organisation that takes on the complete responsibility for the rehabilitation and long-term management of national parks in partnership with governments and local communities. With the largest counter-poaching force and the most amount of area under protection for any one NGO in Africa, African Parks manages 15 national parks and protected areas in nine countries covering 10.5 million hectares in Benin, Central African Republic, Chad, the Democratic Republic of Congo, the Republic of Congo, Malawi, Mozambique, Rwanda and Zambia. For more information visit www.africanparks.org, Twitter, Instagram and Facebook.