It doesn't matter how much you know about lions, or what you think you know about them, how many scientific publications you've read, nor how much time you've spent with them. They will always surprise you. None more so than a very beautiful lady that I've known for the last three years. I met Lady in mid-2014 at Liuwa Plain National Park in Zambia and was privileged to witness just a small piece of the puzzle that made up one of the world’s most famous lionesses. 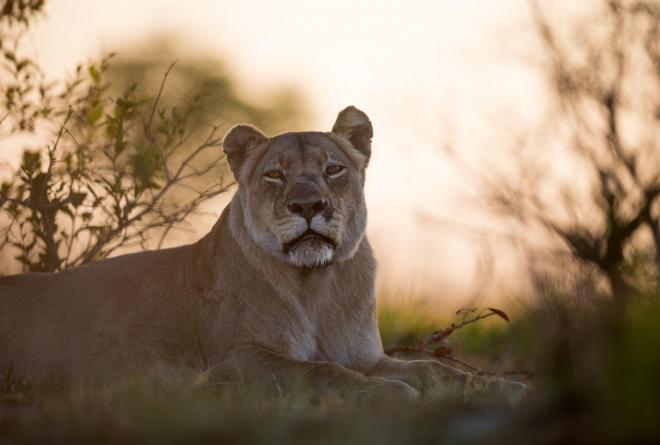 While driving through Liuwa and its massive open landscape, you can literally almost see the curvature of the earth. The lions, you can generally see from a kilometre or so away - the small bump on the horizon is the giveaway in the vast open landscape. As you meander slowly over the crisp earth towards them you can always recognise Lady from a distance, the way she cocks her head to the side, waiting for you, expecting you; that'll be Lady.

And it was true; she didn't look at you like a lion - there was none of that bone chilling stare, head held high, alert "through you" sort of look. She would give you a sort of gentle titled head view, a relaxed and familiar pose. A look that had seen it all, and been through thousands of nights of loneliness. But that look - the sharing of space, with you - an outsider; there was that.

There are very few photos I have of her where she wasn't either playfully rolling on her back, playing with her "adopted" cubs or gazing at you in that titled pose. Regal in fact. Age sometimes highlights regality, and with Lady it was no exception; she was close on 17 years, and had somehow made it through so much.

Everyone that has had time with Lady, from the local villages living in the park, to filmmakers, scouts and visitors, we all have a story. Something special, something unusual, something that cuts straight across the pure science of fact. The fact is sometimes simply something that becomes diminished by black and white type, brought to us in an inbox full of noise. There are too many stories I've heard from the camp attendants, the nearby villages where fact, and for that matter fiction, simply doesn't make sense.

I could write multiple stories, I tried to, but to be honest none of them bring to life the memory of what I have of Lady. There is a book by Malcolm Gladwell, called "Outliers," and if he ever wrote an updated version, I'd ask him to include Lady Liuwa’s story. She was an anomaly, an orphan, that had somehow survived the odds of the harshness of the African bush. And although her entire pride had been wiped out by illegal hunting, she found friendship in humanity, and later with an adopted pride. She was a bridge perhaps between what should have been in our Eden and what we see so much around us today.

I last saw her on the 15th of July. She was looking magnificent, old, tired certainly and perhaps a bit blind. She entertained us for a while with her "adopted" nephews in an attempt to dig out an aardvark from a burrow and then she, along with her adopted family including two rambunctious cubs moved off. I said goodbye to her that day, not even remotely guessing that a few weeks later we'd all be saying goodbye. We'll never know what went on in those last few days but what we do know is that her story of survival, of restoration and of unity lives on the small and growing pride that now exists in Liuwa, because of her.

It's hard for me, as a wildlife manager to become relaxed in discussing matters of anthropomorphism. We often have to separate ourselves from the harsh reality of managing huge natural systems, where animals don't have names, and not allow our personal desires to step in the way of management decisions. Most of the time we refer to these beasts by numbers. Generally, the allocated number of the VHF telemetry collar that they're wearing - Cheetah 179, Li-252 etc. The last year of so we've pondered what would happen when she got old, would she resort to livestock killing, would humans be in danger? My, how we completely missed the mark. Perhaps that's why on my VHF receiver her title is not Li-148 as it should be, quite simply, it's just "Lady".

Please donate to support the continued restoration of Liuwa’s lions