Straddling the Sahelian and the Saharan areas of north-east Chad, Ennedi Massif is a water-rich desert landscape associated with the presence of large ephemeral streams and semi-permanent pools of water, or gueltas. The Massif consists of two immense plateaus composed of highly permeable sedimentary rock resting on a granite basin. This vast water reservoir gives life to the desert, enabling Ennedi to support an astonishing diversity of species including over 525 species of flora. 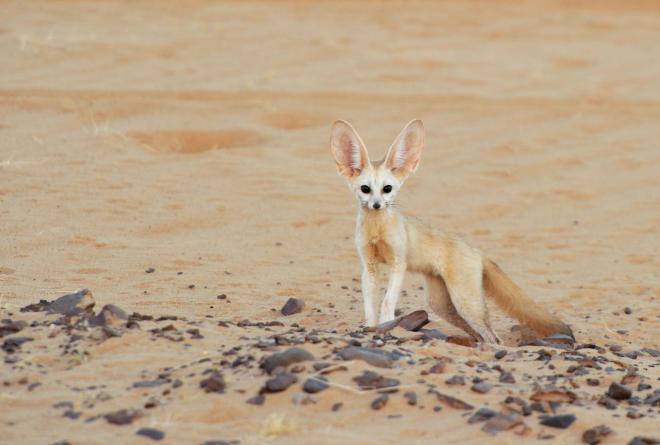 Ennedi has long been a refuge for Saharan wildlife, with species such as addax, oryx, cheetah, Dama and Leptocere gazelles among others present in large numbers until the mid-20th century. While poaching and conflict almost eradicated these species, some exceptional wildlife spectacles remain. Still present are Barbary sheep, Dorcas gazelle, striped hyaena, baboon, patas monkey, caracal, and honey badger, desert hedgehog, common genet, Rüppell’s fox. Remarkably, a small relic population of crocodiles (Crocodylus suchus) persists in the Guelta d’Archei, the last known representatives of this species throughout the Sahara.

Bird life in the Massif is highly diversified, as the area is a migratory crossroads that provides important habitat for at least 185 listed species utilizing it on their transcontinental movements. Species include; red-necked ostriches, cream-coloured courser, and Sudan golden sparrow.

© Michael Viljoen
One of four desert crocodiles in Ennedi.

The restoration and conservation of Ennedi’s wildlife populations is a management priority. The process involves several key measures, including regular ecological data collection and long-term monitoring of key species, and the reintroduction of locally extinct emblematic species. A project is currently underway to introduce additional red-necked ostriches to bolster the existing population and a study is underway to explore the possibility of introducing more desert crocodiles. Chad is home to the only viable populations of both of these species and their in-situ conservation is essential to their survival.