Bazaruto Archipelago is one of the most important marine sanctuaries along the East African coastline, representing a range of critical habitats for many rare and endemic species.

The archipelago hosts an assortment of marine life, including 500 species of marine and coastal molluscs, 2,000 fish species and nine species of marine mammals, including whales, dolphins and the endangered dugong. Migratory species also make use of the park’s productive marine environment and include whale sharks, great white sharks, manta rays and killer, southern right and humpback whales.

Aside from Bazaruto being located in an ecologically rich tropical zone, the close proximity of its varied marine habitats contributes to an outstanding wealth of fish species. The eastern half of the park possesses a considerable number of pelagic and larger species, including kingfish, king mackerel, sharks, marlin and sailfish. Slightly farther from the shore, true oceanic species take up residence, such as the brightly coloured Dorado, the tropical yellowtail and the larger charismatic species, such as giant manta rays and whale sharks. 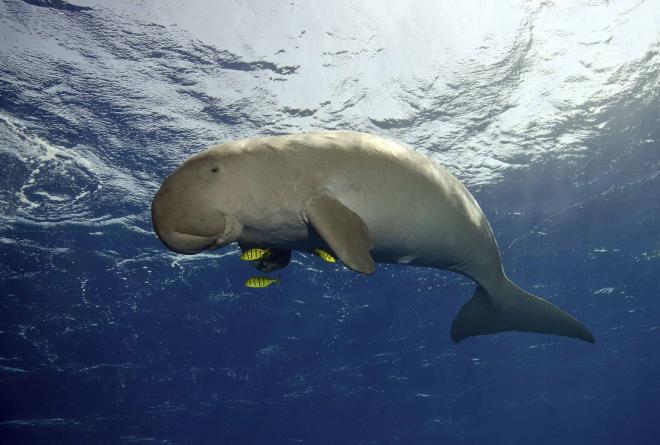 Bazaruto is also home to the last viable population of dugongs in the western Indian Ocean. The dugong is the only strictly marine herbivorous mammal, and is the only living representative of the once-diverse family, Dugongidae, after its closest modern relative, the Steller’s sea cow, was hunted to extinction in the 18th century. Under the management of African Parks, regular conservation monitoring measures are being implemented to survey and better protect this key species and its habitats. An aerial survey conducted in 2021 revealed approximately 325 dugongs, while a second count in December found a single herd of over 55, including multiple calves. This is the largest herd of western Indian Ocean dugongs seen since the 1960s.

Most of the park’s reefs are located to the east of its islands. The reefs themselves are varied in structure and offer a range of diving experiences for the ecotourism industry. They are a valuable resource as they are an isolated node of reef development between the limited reefs in southern Mozambique and South Africa and the more extensive coral reefs north of Beira.

The archipelago is rich in birdlife. Over the years, many amateur birdwatchers and professional ornithologists have contributed to an understanding of the bird species that occur in the park’s diversity of habitats. Together, more than 180 species have been recorded during these observations. Not surprisingly, the avifauna is strongly influenced by coastal birds, such as waders and especially terns. Rare birds, including pratincoles and ospreys, have been spotted in the park. Greater and lesser flamingos, great white and pink-backed pelicans, along with five kingfisher species, are among the park's most special birds.

The turtle-nest monitoring programme, which started in 1994, documented 55 nests across all five islands in 2021 and recorded 2,019 live hatchlings.