Five endangered Eastern Black Rhinoceroses were successfully translocated from Safari Park Dvůr Králové in the Czech Republic and released into bomas in Akagera National Park in Rwanda, expanding the genetic diversity of a founder population introduced in 2017 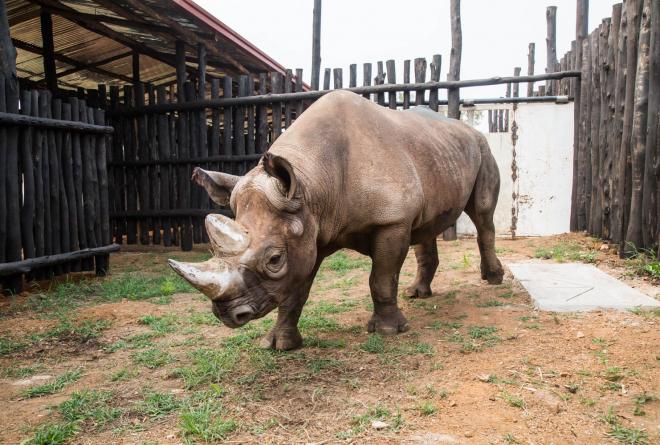 Kigali, Rwanda: Akagera National Park’s Eastern Black Rhino population has grown with the arrival of five new individuals from European zoos following a translocation undertaken by the European Association of Zoos and Aquaria (EAZA), the Rwanda Development Board (RDB) and African Parks, which manages Akagera National Park in partnership with the RDB. Two male and three female Eastern Black Rhinoceroses were released into bomas in Akagera on Monday 24th June 2019, with the aim of increasing the genetic diversity of the park’s rhino population and aiding efforts to restore the critically endangered subspecies in Rwanda and the region.

“The newly translocated rhinos will bolster the founder group that we introduced in 2017, contributing to the reestablishment of a robust Eastern Black Rhino population in Rwanda,” said Jes Gruner, Park Manager of Akagera National Park. “This unique achievement represents the culmination of an unprecedented international effort to improve the survival prospects of a critically endangered rhino subspecies in the wild. Their arrival also marks an important step in Akagera’s ongoing revitalization, and one that underscores the country’s commitment to conservation.”

Originally hailing from Safari Park Dvůr Králové (Czech Republic), Flamingo Land (United Kingdom) and Ree Park Safari (Denmark), and selected from the EAZA Ex Situ Programme (EEP) for Black Rhino, the five rhinos began their journey from the Czech Republic on the 23rd June following months of preparation at Safari Park Dvůr Králové. Every precaution was taken to minimize stress and ensure their well-being throughout the translocation process. They were flown to Kigali before being transferred to Akagera National Park by truck.

“We are committed to the long-term success of Eastern Black Rhinos in Rwanda,” said Clare Akamanzi, CEO of the Rwanda Development Board. “Their health and well-being is crucial to wildlife conservation and biodiversity protection efforts, both in Rwanda and across Africa. We couldn’t be prouder of the strong community-led conservation efforts that make their new home, Akagera National Park, one of the most vibrant and spectacular Big Five Parks in the region, and we are sure that the Park’s newest residents will settle in well. Tourists visiting Akagera National Park will get to witness a truly wonderful sight, the Eastern Black Rhino in its natural habitat.”

Akagera National Park, a protected savannah habitat in Rwanda that contains excellent black rhino habitat, has undergone a remarkable transformation since African Parks assumed management in 2010 in partnership with the Rwanda Development Board. In 2017, ten years after Eastern Black Rhinos had last been seen in Akagera, the species was reintroduced with the translocation of 18 individuals from South Africa through a project supported by the Howard G. Buffett Foundation.

The founder population that now numbers 20 adapted well, demonstrating the park’s potential to sustain a black rhino population while underscoring the extremely high levels of security and effective park management provided by African Parks and the Government of Rwanda. Just under a decade of management with improved law enforcement and strong community and economic development initiatives has seen poaching practically eliminated, key species including lion and rhino returned, significant support fostered for conservation, and vibrant tourism leading to Akagera being 80% self-financing.

The long-term viability and genetic health of Rwanda’s Eastern Black Rhino population requires the introduction of additional animals. The five newly translocated individuals—two males and three females whose ages range from two to nine—were carefully selected and result from the foresight and vision of EAZA in helping to supplement wild populations in secure parks in Africa with genetically-robust individuals successfully bred and nurtured by the EEP.

“The success of the EEP has enabled us to supplement natural populations of rhinos in Africa,” said Dr. Thomas Kauffels, Chair of the European Association of Zoos and Aquaria. “Modern zoos are a key part of the conservation landscape, and our collaboration with Akagera National Park and the Rwanda Development Board demonstrates how zoos can contribute directly to the conservation and recovery of endangered species in protected landscapes.”

Extensive security measures have been implemented to ensure the long-term safety and well-being of Akagera’s rhinos. They include an expertly trained rhino tracking and protection team put in place in 2017, a canine anti-poaching unit, and the deployment of a helicopter for critical air surveillance to enhance protection of the park – all made possible with funding provided by the Howard G. Buffett Foundation.

Black rhinos are considered critically endangered by the International Union for Conservation of Nature (IUCN), with fewer than 5,000 black rhinos remaining across their range in the wild, and of these approximately 1,000 are the critically endangered Eastern black subspecies. This translocation, which is being carried out according to IUCN guidelines, represents an urgent and valuable opportunity to expand the range of the black rhino with the help of captive-bred rhinos to supplement and repopulate wild populations. It also forms part of the Government of Rwanda’s vision to revitalize and protect its natural heritage to create a future in which both people and wildlife can thrive.

About Akagera National Park and African Parks: The Akagera Management Company (AMC) was established in 2010 and is the joint venture vehicle of the public-private partnership between the RDB and African Parks that has been responsible for fully managing Akagera National Park since 2010. African Parks is a non-profit conservation organisation that takes on the complete responsibility for the rehabilitation and long-term management of national parks in partnership with governments and local communities. With the largest counter-poaching force and the most amount of area under protection for any one NGO in Africa, African Parks manages 15 national parks and protected areas in nine countries covering over 10.5 million hectares in Benin, Central African Republic, Chad, the Democratic Republic of Congo, the Republic of Congo, Malawi, Mozambique, Rwanda, Zambia.

About the European Association of Zoos and Aquaria: The membership organization of Europe’s most progressive zoological institutions, the European Association of Zoos and Aquaria comprises more than 400 zoos, aquariums and other institutions across 48 countries, collaborating for the advancement of conservation, research and education. EAZA is a significant stakeholder in the fight to protect the future of the natural world, both in Europe and across the world.

About the EAZA Ex Situ Programmes: EAZA is responsible for the planning and administration of over 200 EAZA Ex Situ Programmes (EEP), the principal structure for ex situ conservation of wild animals in Europe. Each EEP is designed to fulfill a specific role that helps safeguard the future of the species and/or its habitat, and is run by a dedicated species committee headed by a Coordinator, an experienced population manager from an EAZA Member zoo or aquarium. EEPs use molecular biology, demographic and genetic analysis, and many other scientific disciplines to maintain a diverse, self-sustaining population of a species within European zoos and aquariums.

About Safari Park Dvůr Králové: Safari Park Dvůr Králové is one of the best rhino breeders outside of Africa. So far, 46 black rhinos have been born there and the park coordinates efforts to save the northern white rhino. The park assists with conservation of rhinos, even in the wild and rhinos sent from Dvůr Králové to Tanzania years ago have been regularly producing calves. In 2014 and 2017, the park organized public burnings of rhino horn stockpiles to raise awareness of the plight of rhinos.

Supporters of the Rhino Translocation and Akagera National Park