The ‘Last Lioness’ of Liuwa Plain

It has been confirmed by African Parks that a legendary lioness fondly known as ‘Lady Liuwa’, who lived in Liuwa Plain National Park in Zambia, has died of natural causes on August 9th, 2017, just one-day before World Lion Day. African Parks, a conservation NGO which manages national parks and protected areas across Africa, has been managing Liuwa Plain in partnership with the Zambia Department of National Parks and Wildlife (DNPW) and the Barotse Royal Establishment (BRE) since 2003. 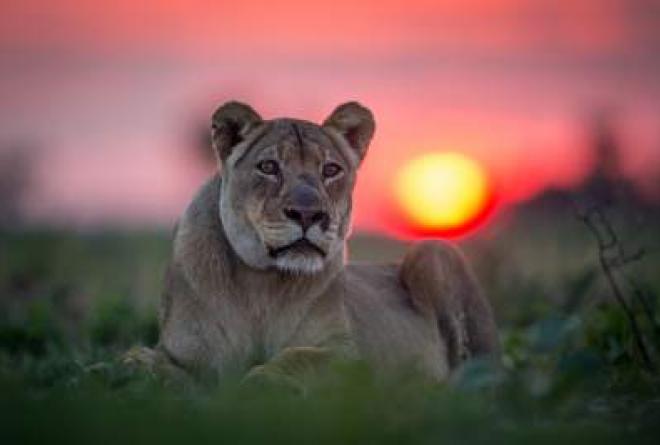 Lady Liuwa was an icon, and a symbol of survival and resilience. Due to years of poaching and illegal trophy hunting, lions were completely eradicated from Liuwa Plain in the 1990’s, except for one lioness – Lady Liuwa. Her presence was first confirmed in 2002 and since then she roamed the plains for years as the sole survivor in the park.  With no lions to be found, she looked to humans for companionship.  Her extraordinary story of survival, as well as how African Parks helped give her a pride of her own, became one of the most moving wildlife films ever produced.

“Lady Liuwa was a truly exceptional lioness, so much so that it is impossible to do justice to her in words” said Peter Fearnhead, CEO of African Parks. “Oftentimes she would lie just five meters away from our camp-fire in the middle of the park. When it came time to go to bed, she would follow, walking parallel to the path and then fall asleep in front of one of our tents. In the mornings, we would find her in a tree, just watching but never threatening us. After years of being solitary, and after several reintroductions and careful management, we were finally able to unite her with her own kind. While her passing saddens us all, she leaves behind a legacy of survival in the small but growing pride in Liuwa Plain”.

The efforts to find Lady Liuwa her own family were not without setbacks. After five years of waiting for lions to return to Liuwa from the larger landscape, and after securing the park through improved law enforcement and working with local communities, African Parks reintroduced a male lion in 2008 to join Lady. Sadly, he died during the translocation process.  A year later, two more males were reintroduced, both of whom mated with Lady Liuwa but she never produced any cubs, almost certainly because of her infertility. Two young lionesses were then reintroduced in 2011.

However, in 2012 one of the females was killed by a poacher’s snare and the other, Sepo, fled towards the Angolan boundary. In a dramatic rescue mission, Sepo was darted, flown back to the park by helicopter and placed in a boma for safety along with Lady Liuwa to encourage Sepo to bond with Lady, critical for the young lioness' survival. And this time it worked. After two months, they were released back into the park, and were inseparable from that point forward. Sepo produced her first litter of cubs shortly thereafter.

The growing pride suffered another setback when the two males left the park and entered Angola. One was shot and killed by villagers, but the other made it safely back to Liuwa on his own, where he became the resident male. African Parks in collaboration with the Zambia Carnivore Programme (ZCP), DNPW and Mushingashi Conservancy reintroduced another male lion in September 2016 to help grow the pride and increase genetic integrity. The newly translocated male and the resident male were placed in a boma for two months to undergo the bonding process and then were successfully released into the park to join with the females. While the males were in the enclosure, Lady Liuwa and Sepo would visit them, sleeping just outside of it at night, and staying just a short distance from it during the day. On November 15th 2016 it was confirmed that Sepo had produced another two new cubs, sired by the resident male.  While Lady Liuwa could not have cubs of her own, she was seen helping to raise Sepo’s numerous litters over the years, and it was clear that finally Lady Liuwa had a pride of her own.

Lady Liuwa’s exact age is unknown, but it is believed she was 17 years old, an extraordinary feat for a wild lion hunting and surviving on her own, and is a testament to the collaborative protection she was afforded by African Parks, the DNPW, ZCP and the BRE.  Her remains along with her VHF collar were found yesterday. There was no sign of human activity and it is believed she died of natural causes.

“It’s incredibly rare for a lion to live to such an old age and to die from natural causes” said Matthew Becker, CEO of ZCP. “Lions are incredibly threatened across their range given the levels of poaching, conflict killing and habitat loss and fragmentation that is occurring across the continent. Her survival and that of her growing pride signifies what can happen when people come together to help protect and restore a species – Lady’s story is one of hope and possibility”.

Please donate to support the continued restoration of Liuwa’s lions