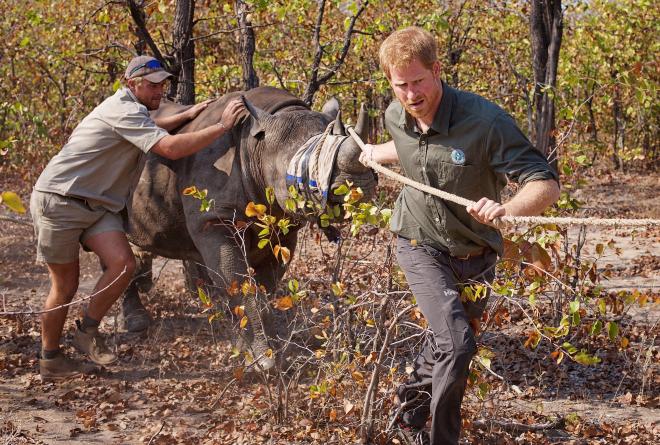 Johannesburg, South Africa: In a move that underscores his commitment to conservation, His Royal Highness Prince Henry of Wales has formally joined African Parks as their President. The appointment was just made public in a statement released by Kensington Palace. African Parks is a conservation NGO, founded in 2000, that manages national parks and protected areas on behalf of governments and in collaboration with local communities across Africa. With 13 parks under management, they have the largest area under conservation for any one NGO on the African continent.

“We are extremely honoured to have Prince Harry officially join African Parks as our President” said Peter Fearnhead, CEO of African Parks. “Prince Harry has had a long history supporting conservation and humanitarian efforts across Africa. He is extremely passionate, committed and knowledgeable about the issues, and is a force for conservation not just for Africa but for the world. He shares in our vision, and together, with him in this influential role, we aim to continue to do extraordinary things for the benefit of Africa’s wildlife and the people who live in and around these wild areas”.

Prince Harry’s first experience working alongside African Parks was in July of 2016 in Malawi, where he served as an integral member of their team, carrying out one of the largest elephant translocations in history. Along with moving elephants to a new home, Prince Harry assisted with translocating a rhinoceros, a host of game species including antelope, buffalo, and zebra, and he facilitated in re-collaring three lions with GPS collars to help better protect them. Together with Peter Fearnhead, he also met with Malawi’s President Mutharika to discuss the Presidents’ conservation vision for the country, as well as the work of African Parks, who manages three parks in Malawi and is responsible for protecting 90% of the country’s elephant population.

“In his role as President of African Parks” said Robert-Jan van Ogtrop, Chairman of African Parks, “Prince Harry will work closely with our Board and Peter Fearnhead our CEO, to advance our mission in protecting Africa’s national parks. He’ll be able to help shine a light on the most pressing and urgent issues wildlife are facing, and most importantly, what people can do to help”.

About African Parks: African Parks is a non-profit conservation organisation that takes on the complete responsibility for the rehabilitation and long-term management of national parks in partnership with governments and local communities. With the largest counter-poaching force and the most amount of area under protection for any one NGO in Africa, African Parks manages 13 national parks and protected areas in nine countries covering over seven million hectares in Benin, Central African Republic, Chad, the Democratic Republic of Congo, the Republic of Congo, Malawi, Mozambique, Rwanda and Zambia. Visit www.africanparks.org to learn more; and follow us on Twitter, Instagram and Facebook