First Wild Rhino Born in Rwanda in Over a Decade

The first wild rhino calf to be born in Rwanda in over a decade has been confirmed by Akagera National Park, four months after 18 Eastern black rhinoceroses were successfully reintroduced into the park 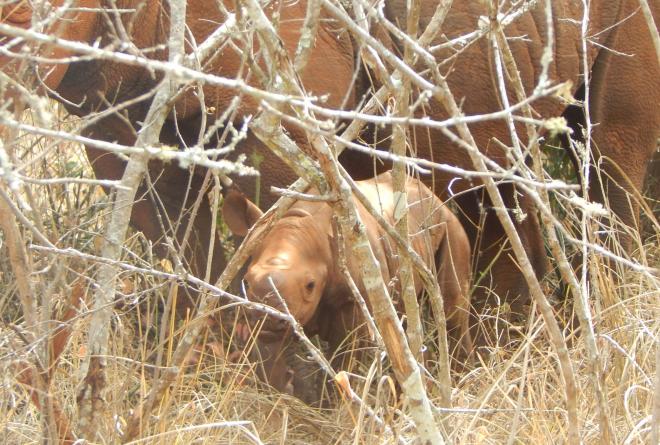 © African Parks / Augustin Manirarora
Ineza pictured for the first time with her new calf, the first wild rhino born in Rwanda in over a decade

Kigali, Rwanda: Akagera National Park has confirmed the birth of a healthy rhino calf, the first to be born in the country in over a decade. This exciting announcement falls on World Rhino Day, September 22nd, and comes only four months after 18 Eastern black rhinoceroses were successfully translocated from South Africa into the park. The historic translocation was led by African Parks, a conservation non-profit that manages national parks and protected areas on behalf of governments across the continent, in collaboration with the Rwanda Development Board (RDB) and with funding provided by the Howard G. Buffett Foundation. The People’s Postcode Lottery and the Dutch Government provided additional support to the project.

While this is the first photographic evidence of the calf, the park’s dedicated rhino monitoring team initially sighted the young calf in August and it has been sighted regularly since. Based on this timing, its mother who has been named Ineza, would have been well in to her 15 to 16-month gestation period when she arrived safely in Akagera in May this year. Ineza was brought over from South Africa with her older male calf, which now at two and a half years of age has left his mother and found his own territory and independence in Akagera.

“The first rhino calf to be born in over a decade is a profound moment for Rwanda and its people, a country that is leading in its commitment to the conservation of endangered species” said Jes Gruner, Akagera National Park Manager.  “The collaboration with the RDB in the restoration of the park over the past six years has made bringing back the Eastern black rhino, one the rarest subspecies on the planet, possible in Rwanda. Through our management and protection and collaboration with local communities, we’re working to safeguard the growth of an important population of rhinoceroses for the region”.

After six years of securing the park and essentially eliminating poaching, in the first two weeks of May this year 18 Eastern black rhinos made a 4,000-kilometre journey by cargo plane from South Africa to Kigali in Rwanda, from where they were transferred and successfully released in to Akagera National Park, which is a protected savannah containing excellent black rhino habitat. Tracked daily by dedicated monitoring teams, the translocated animals are prospering while this new calf brings their population total up to 19. In the 1970s the park was home to more than 50 black rhinos, but under the pressure of poaching their numbers were reduced until the last confirmed sighting of the species in 2007. This historic move has been a valuable restorative opportunity, expanding the range of a subspecies with fewer than 1,000 remaining animals across its range on the continent.

Since assuming management of Akagera National Park in partnership with RDB in 2010, African Parks has overhauled law enforcement, reducing poaching to an all-time low with not a single animal poached this year. Wildlife is now flourishing in the park, where the lion population has more than doubled since African Parks reintroduced seven lions in 2015, and the return of rhinos have made the park a ‘Big Five’ destination. Tourism revenue has increased by 550% since African Parks assumed management in 2010, and the park is now 70% self-financing due to tourism, which has seen a jump since security has been restored and since lions and rhinos were reintroduced. Preparations were made specifically to ensure the long-term safety and well-being of the rhino population, including expertly-trained rhino tracking and protection team, a canine anti-poaching unit, and the deployment of a helicopter for critical air surveillance to enhance protection of the park, which have been made possible with funding provided by the Howard G. Buffett Foundation.

While a scourge of poaching for rhino horn continues to decimate their numbers across Africa, with fewer than 5,000 black rhinos and 1,000 of the Eastern black rhino subspecies remaining, the birth of Rwanda’s first new calf in this secured sanctuary is a celebration of hope for the species. As we commemorate World Rhino Day, an international day to raise awareness for the conservation of all five species of this iconic land mammal, we are encouraged by the optimism of a promising future for this important founding population.

About African Parks: African Parks is a non-profit conservation organisation that takes on the complete responsibility for the rehabilitation and long-term management of national parks in partnership with governments and local communities. With the largest counter-poaching force and the most amount of area under protection for any one NGO in Africa, African Parks manages 11 national parks and protected areas in eight countries covering six and a half million hectares: Benin, Central African Republic, Chad, the Democratic Republic of Congo, Malawi, the Republic of Congo, Rwanda and Zambia. Visit www.african-parks.org  and www.rhinomove.org to learn more. Follow us on Twitter, Instagram and Facebook

About Rwanda Development Board: In 2010, the Rwanda Development Board (RDB) signed an agreement with African Parks establishing the Akagera Management Company (AMC) to jointly manage the park. RDB works to transform Rwanda into a dynamic hub for business, investment and innovation, and to fast-track economic development by enabling private sector growth. Visit www.rdb.rw and www.rwandatourism.com to learn more.