18-Year Sentence Handed Down to Rhino Poacher by Malawian Court

An unprecedented total of an effective 36 years of prison time has been handed down to three people convicted for poaching a black rhinoceros in Liwonde National Park, Malawi, this year 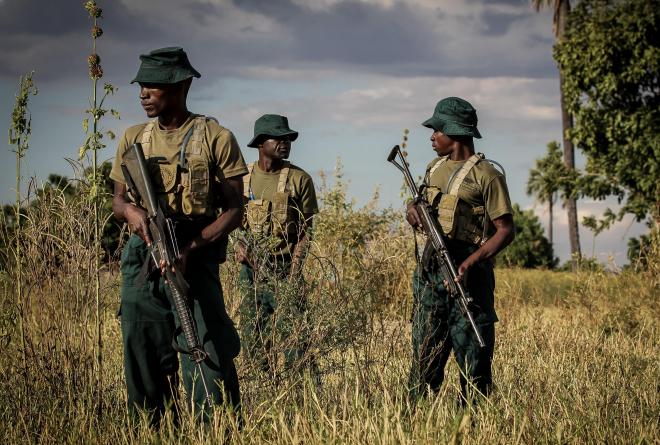 Liwonde, Malawi: A man tried and convicted of poaching a black rhinoceros in Liwonde National Park, Malawi, was handed down an 18-year prison sentence at Liwonde Magistrates’ Court on Thursday October 19th, setting a new precedent in the punishment for wildlife crime in the country. Two accomplices were also given long-term sentences of ten and eight years each. The black rhinoceros was discovered poached by rangers on the 13th of July in Liwonde National Park, which has been managed by African Parks, a conservation non-profit, since 2015 in partnership with Malawi’s Department of National Parks and Wildlife (DNPW). After the carcass had been located, the rhinoceros’ horns were subsequently found the same day using tracking technology.

The arrests followed a joint operation that was undertaken by the wildlife investigation units in the Malawi Police Services and DNPW. The case was subsequently included in Malawi’s wildlife justice court programme and the investigations and court proceedings were supported by African Parks, the Lilongwe Wildlife Trust and the International fund for Animal Welfare (IFAW). On Wednesday, the Chief Resident Magistrate for the Eastern Region of Malawi passed sentencing on the three suspects convicted of killing the adult female black rhinoceros in Liwonde National Park. The key charges brought against them included entering into a protected area without authority, conveying a weapon into a protected area, killing a listed species, possession of a weapon and possession of rhino horn (possession and dealing in government trophies, namely of listed species). The sentences, amounting to an effective total of 36 years in prison with hard labour and no option of a fine, are the first and most severe to be handed down for a serious wildlife crime since Malawi strengthened penalties by amending its National Parks and Wildlife Act in December last year.

“Rarely in wildlife crime are the perpetrators brought to justice,” said African Parks’ Craig Reid, Park Manager of Liwonde National Park. “The speed at which the poachers were located, arrested, tried and convicted is a testament to the Malawian government and its partners’ commitment to protecting their wildlife and taking a stand against criminal activity. This serves as a major deterrent to would-be poachers as well as an example to other African nations on how to carry out effective wildlife law enforcement”.

In delivering the sentencing, the Magistrate His Worship Masoamphambe expressed the importance of wildlife to the Government of Malawi and specifically as a generator of foreign investment. He also described perpetrators of wildlife crime as “enemies of the nation”. His final comment to the public in the courthouse was “Hands off wildlife! Wildlife crimes are serious and those found with charges to answer will not be met with smiles in court”.

“The successes of this case are reflective of our wider efforts and achievements in Malawi to crack down on wildlife crime,” said the Director of the Department of National Parks and Wildlife Brighton Kumchedwa. “We now have a law enforcement and legal system that are serious about these offenses and protecting our country’s wildlife, and we’re proud that these have delivered swift justice”. The new specialist wildlife investigation units in-country have made over 100 arrests of wildlife traffickers and traders since their recent establishment. Conviction rates have also increased dramatically as a result of the Lilongwe Wildlife Trust’s wildlife justice programme, which has seen a 96% conviction rate and a total of 85 custodial sentences passed in 2017 to date. In contrast, between 2010 and 2014, c.60 trafficking convictions were made with an average fine of just US$40. No prison sentences had been passed. The 18-year prison sentence is the lengthiest judgment passed to date.

The poached rhino in question was located by members of Liwonde National Park’s dedicated rhino monitoring team that are employed to constantly track the rhino population in Liwonde. Upon receiving the notification of the incident from the team, park management immediately initiated a follow-up to recover the horns which had been removed from the carcass. The ensuing operations led to the arrests of a shop owner, a member of the group who poached the rhino, and several other accomplices during follow up investigations. This was the result of a collaboration between African Parks, DNPW, and the Malawi Police Service. Support for the investigations was provided by African Parks, Lilongwe Wildlife Trust and IFAW.

The rapid response to the poaching incident in the park is a testament to the effectiveness of Liwonde National Park’s law enforcement team, which has achieved some major accomplishments over the past two years since African Parks assumed management in 2015. Significant investments have been made in training rangers, providing needed equipment and high level technology, all aimed at bringing an end to wildlife crime in the area. The overhaul of law enforcement in Liwonde has led to many arrests and seizures, including 27,000 wire snares, 66 gin traps, 16 illegal firearms, 43 kg of ivory and one set of rhino horns. Liwonde was also home to the historic ‘500 Elephants’ initiative, which was done in collaboration with the DNPW and completed in August of this year.

“Malawi made a strong example of the consequences for wildlife crime with yesterday’s progressive ruling” said Jonathan Vaughan, CEO of Lilongwe Wildlife Trust. “This result heralds the advances made by the Government and the coordinated efforts of all parties involved, establishing that Malawi is no longer a soft target for perpetrators of these crimes”.

The outcome of this case would not have been possible without the resolve of the Government of Malawi in their firm stance against wildlife crime, as well as the cooperating partners at the Malawi Police, the Department of National Parks and Wildlife, African Parks, the Lilongwe Wildlife Trust and IFAW. The sentencing sets a record for the nation, and should act as a deterrent to poachers, traders and traffickers of illicit wildlife parts in the region.