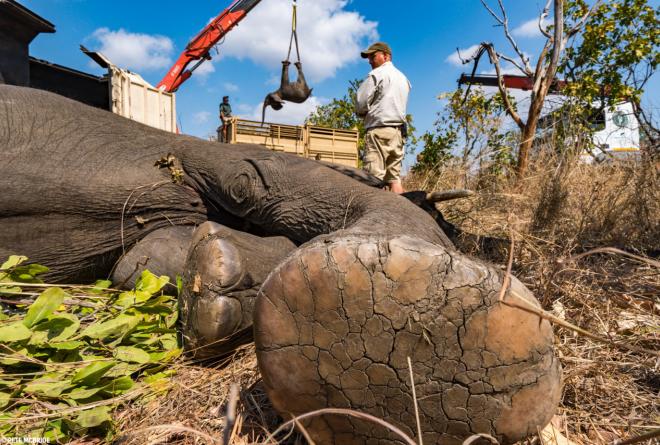 © Pete McBride
An anesthetized elephant waits to be lifted humanely by crane into a wake-up crate where it was driven 600km and released into Nkhotakota Wildlife Reserve, Malawi

African Parks has successfully translocated more than 500 elephants, in an epic journey to protect the species and repopulate a large reserve in Malawi

African Parks completed one of the largest elephant translocations in history on Wednesday, August 2nd, 2017. In total, 520 elephants were successfully moved from Liwonde National Park and Majete Wildlife Reserve in Malawi, and were released in Nkhotakota Wildlife Reserve.

African Parks, a conservation NGO which manages national parks and protected areas across Africa, led this extraordinary undertaking with the goal of repopulating Nkhotakota with indigenous species, and restoring it to its former glory as a premier elephant reserve in Malawi. Liwonde, Majete and Nkhotakota are all managed by African Parks in partnership with the Malawi Department of National Parks and Wildlife (DNPW).

Prior to African Parks assuming management of Nkhotakota in 2015, the park had suffered a significant reduction in its elephant population and other wildlife due to years of poaching, which depleted elephant numbers from 1,500 to fewer than 100. African Parks, in partnership with the DNPW, spent the last two years overhauling law enforcement in Nkhotakota, halting poaching, working with communities and preparing the reserve for the elephants’ safe arrival.

The translocation had two objectives: to restock Nkhotakota and to relieve pressure from the elephant surplus in Liwonde and Majete. Given Malawi is a densely-populated, agro-based country, ecological corridors no longer exist to allow for natural movement for wildlife, therefore this ‘human-assisted migration’ was needed to provide the best chance of a long-term and sustainable future for these elephants.

“This is an important moment for conservation in Malawi, as well as for one of the planet’s most endangered species” said Brighton Kumchedwa, Director of DNPW. “Together with African Parks we have taken extraordinary measures to secure a future for Malawi’s elephants, and at the same time are helping people who live around these critically important wild areas. We’re reducing conflict in two parks, while restoring ecological processes and increasing tourism in the third park, which has positive benefits for local communities. This really is a win-win for both people and wildlife”.

Already there has been a reduction in human-wildlife conflict, with not one human or elephant fatality in Liwonde since July 2016, and tourism is already on the rise in Nkhotakota where new elephant calves were documented earlier this year - offspring from the 261 elephants translocated in 2016.

“Seldom do we hear good news about elephants in Africa” said Peter Fearnhead, CEO of African Parks; “this successful translocation is a pivotal moment for Malawi which has emerged as a leader in African elephant conservation and in park restoration. Rehoming more than 500 elephants, and knowing they will thrive in Nkhotakota, is a story of hope and survival, and a real example of what is possible with good collaboration”.

This giant initiative has been made possible with the generous support from the Dutch Postcode Lottery, the Wyss Foundation, The Wildcat Foundation, Donna and Marvin Schwartz, Stichting Dioraphte, and the People’s Postcode Lottery. African Parks is responsible for managing approximately 90% of Malawi’s elephant population, as well as almost 15,000 elephants among all the parks under their management across Africa.