Zakouma is a refuge for elephants and other species, many of which are threatened within this ecoregion, that stretches across the width of Africa to the south of the Sahara Desert. Zakouma is characterised by distinct wet and dry seasons. The wet season runs between June and November, bringing the park a seasonal average of 850 mm of rain. During this period, much of Zakouma’s terrain becomes inundated with water, causing wildlife to disperse across flat savannahs and grasslands. Some species migrate to areas beyond Zakouma’s boundaries. Wildlife is lured back to the eastern half of the park during the dry season, where pans and fertile floodplains provide plentiful drinking water and abundant grazing. From February to June, large herds of animals and thousands of birds congregate at these pools, making for spectacular game viewing and birding.

The flora of Zakouma forms part of the Sudan-Guinea Savannah vegetation zone and is predominantly comprised of Combretum or Acacia savannah and grasslands, which are important for grazing animals during the dry season—when many habitats dry out. Sections of gallery forests and floodplain depressions or pans are also common in the east of the park. Meanwhile, Inselbergs (granite hilly outcrops) are a characteristic feature of Zakouma’s southwest and Siniaka Minia.

Prominent tree species in the Combretum savannah include paperbark and white thorn. The Acacia savannah is characterised by species like the red acacia (also known as the shittah tree), the scented thorn, the desert date, the jujube, and the ‘bois d’éléphant’ (Combretum glutinosum). Zakouma is also home to vast stretches of Acacia seyal, a culturally significant tree from which Gum Arabic, or acacia gum, is harvested. In the park’s southern riverine areas, enormous Khaya senegalensis and Ficus species meet Terminalia and Anogeissus woodlands whereas the granitic portions of Zakouma’s west boast a variety of Combretum species. 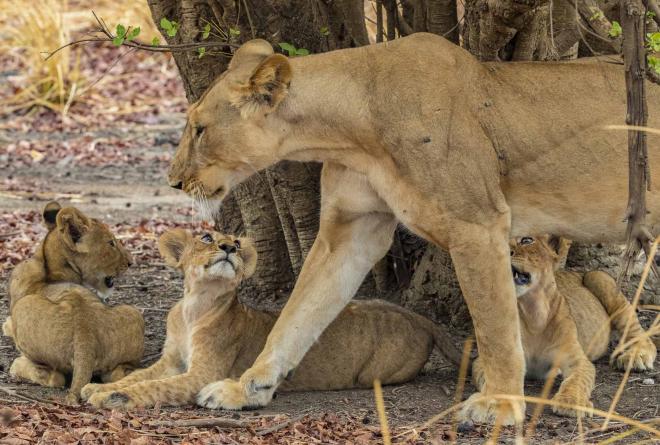 © Steve Winter
Zakouma serves as a sanctuary for West and Central African wildlife, including lion.

Due to perennial water sources, Zakouma serves as a sanctuary for West and Central African wildlife. Around 66 mammal species are found in the park, 16 of which are large mammals, and Zakouma is home to 50% of Africa’s Kordofan giraffe population, a critically endangered subspecies. With the black rhino reintroduction in 2018, Zakouma is the closest ‘Big Five Park’ to Europe. 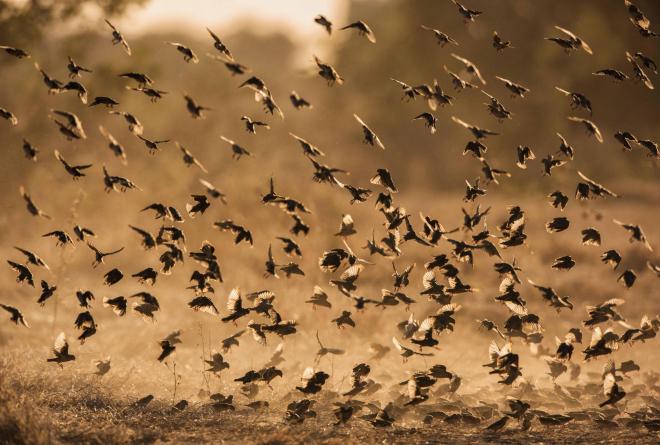 © Michael Viljoen
Over 400 bird species found in the park, including red billed queleas.

Zakouma’s floodplains, rivers, marshes and pans are valuable stopover and breeding grounds for migrating birds, and the south-eastern wetlands form part of the Inundation Plains of Bahr Aouk and Salamat Ramsar site – one of the largest in the world. An estimated 40 raptor species are found in the park, along with abundant populations of northern carmine bee-eaters and red-billed queleas. Zakouma is also home to the Abyssinian ground hornbill, a vulnerable species, and the black-breasted barbet, a species with limited range that is on many a birder’s wish list. Zakouma is believed to contain the largest population of red-necked or North African ostrich in the world; the subspecies is extinct in most of its former range. A recent reintroduction programme saw the capture of ostrich chicks in Zakouma and translocated to Ennedi where they previously occurred.

In 2018, a count found 13,885 black crowned cranes – the highest number of any crane species ever recorded from the ground in Africa. These promising survey results demonstrate that Zakouma is an important stronghold for the beautiful crane, which is found in flocks numbering in the thousands, making the Zakouma ecosystem key to the survival of the species.

The park is an important refuge for numerous animals, many of which are threatened elsewhere within the ecoregion, which stretches as a band across the width of Africa to the south of the Sahara Desert.