Plans are underway to identify and map the impact of alien invasive plant species in the park.

Following lion and rhino reintroductions, Akagera officially became a “Big Five” park in May 2017. It now boasts thriving populations of lion, leopard, elephant, rhino, and buffalo, as well as zebra, giraffe, and hundreds of bird species. 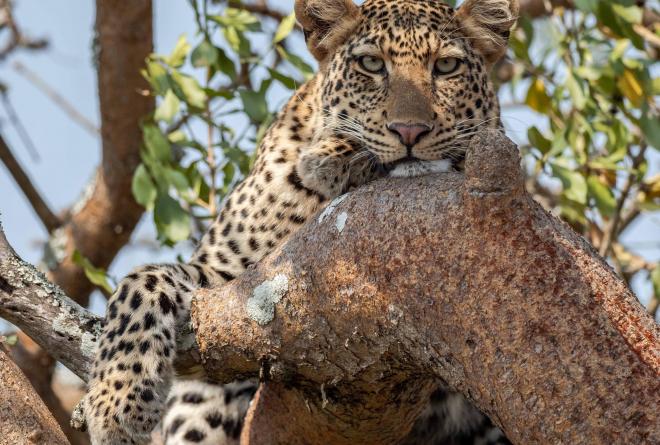 © Hein Meyers
A leopard in Akagera.

Predators: Before the reintroduction of lions, the park’s only large predators were leopards and spotted hyaena. A founder population of seven lions was reintroduced in 2015 after the species was hunted out in the 1990s. Two additional males were translocated to the park in 2017 to increase genetic diversity and the park’s lion population has since quadrupled in size. Small predators are also abundant: serval, side-striped jackal, and several mongoose and viverrid species are thriving.

Primates: Of the primate family, olive baboons and vervet monkeys are common in Akagera. Far rarer is the secretive blue monkey that, until a few years ago, was believed to be extinct in the park.

Elephants have always naturally occurred in Akagera, but poaching wiped them out until an initial reintroduction returned a young group of 26 individuals—all under the age of eight—in 1975. The founder population has since grown to roughly 100 individuals. In 2021, the biennial aerial census counted 11,891 large mammals including 133 elephant who enjoyed a 20% increase in population since the 2019 aerial census.

2017 saw the historic return of 18 eastern black rhinoceros to Akagera—and Rwanda—after a 10-year absence. The first calves were born in 2018, and five black rhinos translocated from European zoos in June 2019 promise to boost genetic diversity. In partnership with the RDB and andBeyond, we successfully translocated 30 Southern white rhinos to Akagera from Phinda Private Reserve, in an effort to expand their range state and provide a species safe haven.

Over 400 bird species have been documented in the park. Akagera is an important ornithological site, with rarities such as the shoebill and papyrus gonolek – both restricted to papyrus swamps – as well as the localised red-faced barbet and the swamp flycatcher. Six vulture species, including the lappet-faced and white-backed, were documented – a rare find for the park.

The first ever foot-survey was conducted in 2020 for counting elusive species in harder to access areas, including rare antelopes like roan and eland, as well as giraffe, to determine presence and habitat use. The survey was successful and informative in terms of gauging numbers of key species including accounting for nearly 50% of both roan and eland populations. Eighty-one giraffe were counted, comprising nearly the entire population, as well as over 1,300 buffalo and more than 600 zebra.