Elephants on the Move

Elephants on the Move: The Story

Due to poaching, habitat loss and human-wildlife conflict, elephants are being decimated across Africa. Elephants on the Move, however, is a different story – one of hope and restoration, and of securing the future for Malawi’s elephants.

This July, we are relocating 250 elephants from Liwonde National Park to Kasungu National Park in Malawi, in partnership with Malawi’s Department of National Parks & Wildlife (DNPW) and the International Fund for Animal Welfare (IFAW).

In 2016, African Parks moved 500 elephants in the biggest elephant translocation ever to be undertaken to repopulate Nkhotakota Wildlife Reserve. At that time, Liwonde provided 366 elephants to help alleviate pressure on the park’s habitat and reduce human elephant conflict. Now, with the park’s extraordinary conservation success and with not a single elephant poaching incident since 2018, we are able to help repopulate Kasungu National Park.

Elephants on the Move: The Journey 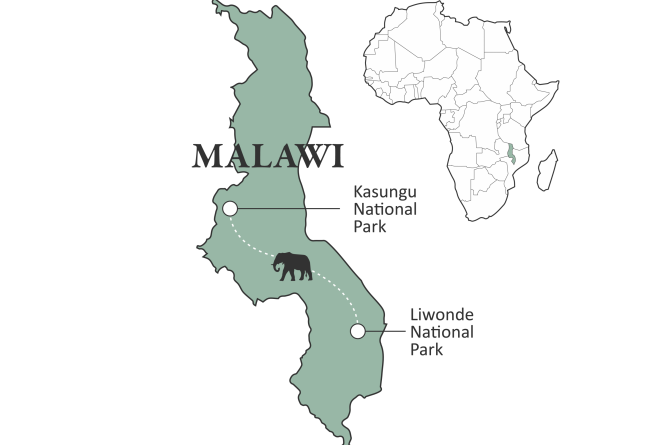 250 elephants are being moved 350 km from Liwonde National Park to their new home in Kasungu National Park. This massive undertaking will contribute to overall elephant conservation in Malawi, help restore habitats and alleviate human wildlife conflict, while augmenting Kasungu’s elephant population to ensure its long-term viability.

Elephants on the Move: Why it is Important

Elephants are a keystone species, which means they play a pivotal role in engineering the structure of plant and animal communities within their habitats. Ideally this is beneficial to the environment, but when populations are too dense and migration is restricted, habitat degradation takes place. As Malawi is a densely-populated agro-based country, lacking the necessary ecological corridors that allow for natural migration, elephant populations within protected areas need to be carefully managed to mitigate adverse effects on both the habitat and the surrounding local communities.

Liwonde National Park, located in southern Malawi, is considered to be a ‘source population’ for elephants. With approximately 563 elephants living within the park, space and availability of natural resources  is near to capacity.. The increasing density of this population is causing degradation of wildlife habitats and intensifying human-wildlife conflict, largely deriving from crop-raiding elephants.

In Malawi  a unique scenario of ‘source populations’ exists with Kasungu National Park providing  a viable ‘sink’ habitat for surplus elephants. The park forms part of the species natural range area containing sufficient resources to support a large herd of elephants and other animals. In the 1970s approximately 1,200 elephants populated Kasungu; prior to the translocation, only about 120 remained. IFAW, in partnership with DNPW, has supported Kasungu since 2015 to address law enforcement, wildlife crime, infrastructure and capacity within the park, making this park now safe for the elephants to be reintroduced.

We are moving 250 elephants from Liwonde National Park to Kasungu National Park. Sign up to be the first to hear more #GoodNews happening around African Parks.