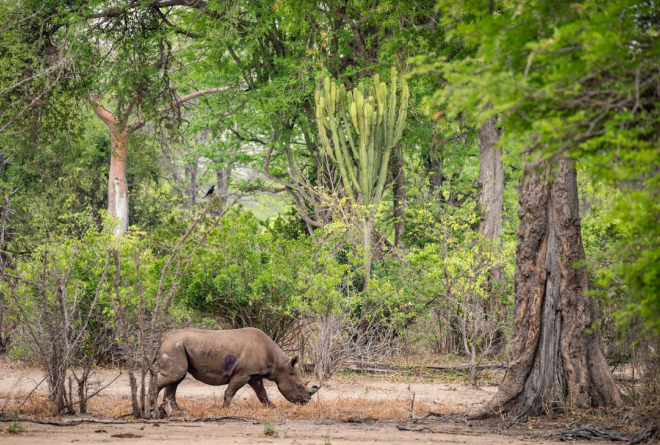 Based on a custodianship agreement signed between the Governments of Malawi and South Africa, the aim is to boost Malawi’s black rhino populations and aid regional efforts to conserve the critically endangered species. This is the first cross-border translocation undertaken by WWF’s Black Rhino Range Expansion Project (BRREP), and the 13th undertaken by BRREP since its inception in 2003.

The 17 rhinos destined for Malawi were captured in KwaZulu-Natal and quarantined for six weeks before being flown from King Shaka airport in Durban to Lilongwe, with every precaution taken to ensure their wellbeing throughout the process. From Lilongwe, they were then driven to their new home, Liwonde National Park, where they were released on Tuesday 12 November and are settling in well.

African Parks is also moving two of Liwonde’s black rhinos to Majete Wildlife Reserve, and another rhino from Majete to Liwonde, to further enhance genetic diversity. The two parks are among four protected areas in the country that are managed by the conservation group African Parks in partnership with the DNPW.

African Parks’ efforts together with the DNPW and local communities to secure and restore Majete and Liwonde since 2003 and 2015 respectively, have transformed these landscapes, resulting in the dramatic reduction of poaching and numerous reintroductions of key species. As wildlife populations have grown, so too has tourism, bringing much needed revenue for their continued conservation and surrounding communities.

Good law enforcement coupled with community initiatives have been central to ensuring adequate security while achieving strong support for Liwonde and Majete. Extensive measures to protect the rhinos include aerial surveillance, daily ranger patrols and the integration of the most advanced technology to enable their live-time tracking. Each animal has been fitted with a new GPS sensor device from Smart Parks, allowing teams to accurately monitor their activity and location on a constant basis.

With only around 5500 black rhinos remaining across their range in the wild, translocations to well-protected areas are essential in giving populations a chance for growth and survival, and allowing future generations of people to benefit from their natural heritage.

The translocation was made possible with the support of Stichting Natura Africae, Vale Logistics and Save the Rhino International. WWF Belgium, The Wyss Foundation, and the People’s Postcode Lottery have provided key multi-year support for the overall management of these parks. The BRREP project is managed by WWF South Africa with funding support from WWF Netherlands, the WWF Nedbank Green Trust and the Ford Wildlife Foundation.

Director of the Malawi Department of National Parks and Wildlife Brighton Kumchedwa: “This international collaboration has provided an important opportunity for us to contribute to improving the prospects of rhinos in Africa. As the Malawi Government we are honoured to be part of this Black Rhino Range Expansion Project. We’re extremely proud of the progress achieved with partners like African Parks for the conservation of threatened species in Malawi. By restoring our natural heritage, in concert with economic development, we’re providing a sustainable future for both wildlife and people in our country”.

Acting CEO, Ezemvelo KZN Wildlife, Ntsikelelo Dlulane: ““The amount of cooperation and collaboration involved in making this project a success has been truly remarkable and it shows what can be done when Africans unite behind a common cause. The export of black rhino to other range states within the African continent represents a significant shift in our efforts to save this species from extinction. Black rhino are a uniquely African species and it is therefore incumbent on the continent as a whole to take collective responsibility for their continued survival. By agreeing to this initiative Ezemvelo has taken a selfless and brave decision to support this concept of an “African solution”.

African Parks’ Craig Reid, Park Manager of Liwonde National Park: “The translocation of black rhino between South Africa and Malawi, supplemented by translocations between Liwonde and Majete, are crucial for the health and survival of these key populations, which will now be managed as one metapopulation in Malawi. Well-managed protected areas are a vital lifeline for countless wildlife and people. Thanks to the leadership of the Malawi Government and our partnership with the Department of National Parks and Wildlife, we’ve been able to ensure that critically endangered species like black rhino can return to these places and people can benefit from these areas being conserved”.

BRREP project leader Dr Jacques Flamand: “Managing for population growth is an essential conservation tool for critically endangered species like black rhino. Since 2003, the Black Rhino Range Expansion Project has successfully moved 220 black rhino onto sites covering more than 300 000 hectares of land. The Malawi translocation was our first international move and has extended this work to the sub-region. This is good news for black rhinos and also all the other species that benefit from their presence. Some of the rhinos we have moved are the progeny of black rhino from earlier translocations. It is very satisfying to see how far we have come since the project began.”

About African Parks: African Parks is a non-profit conservation organisation that takes on the complete responsibility for the rehabilitation and long-term management of national parks in partnership with governments and local communities. With the largest counter-poaching force and the most amount of area under protection for any one NGO in Africa, African Parks manages 16 national parks and protected areas in 10 countries covering 11 million hectares in Benin, Central African Republic, Chad, the Democratic Republic of Congo, the Republic of Congo, Malawi, Mozambique, Rwanda, Zambia and Zimbabwe.

About WWF South Africa: WWF South Africa is a national office that is part of the WWF network. We are a local NGO that for 50 years has worked towards the aim of inspiring all South Africans to live in harmony with nature, for the benefit of our country and the well-being of all our people.

About BRREP: As part of a long-term strategy, WWF runs the Black Rhino Range Expansion Project (BRREP) aimed at increasing growth rate and numbers of the critically endangered species. We work with private and community landholders as well as state conservation agencies to identify large blocks of land on which to establish new black rhino populations.

About DNPW: African Parks and Malawi’s Department of National Parks and Wildlife (DNPW) have been working closely together to rehabilitate habitat and restore biodiversity to the country’s parks since 2003, when a public-private partnership was formed for the management of Majete. African Parks subsequently assumed management of Liwonde, the adjoining Mangochi Forest Reserve, and Nkhotakota Wildlife Reserve in partnership with DNPW following the successful track record achieved in Majete.