Despite their vast size, tropical forests are surprisingly sensitive to disturbances within the ecosystem, and the demise of keystone species, such as forest elephant, can cause the decline of many other species. For this reason, effective law enforcement is essential in ensuring the fragile balance is not disrupted through illegal activities such as poaching for bushmeat. In 2019, the park’s eco-guards logged over 11,000 man-days through 365 patrols which resulted in 58 arrests as well as over 14,500 snares removed and 50 tonnes of bushmeat confiscated. 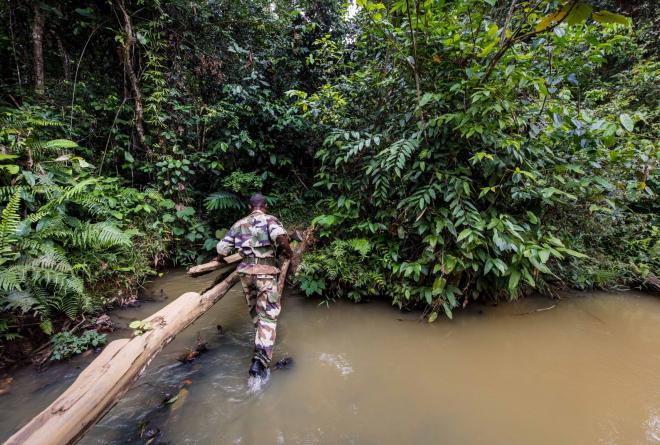 The ranger recruitment, selection and training process began with the independent evaluation of the rangers already working in the park. Those that did not fit in with the selection criteria were redeployed, while the others went through additional training to bring them up to the required level. Additional rangers were recruited from the surrounding communities, and through the ‘Poacher to Protector’ programme which saw ex-poachers receive amnesty for handing in their firearms and declaring any previous illegal poaching activities. Rangers regularly receive training in new skills, and in 2019 all 94 rangers underwent a two-month long refresher training course along with specialised training in leadership skills and human rights. 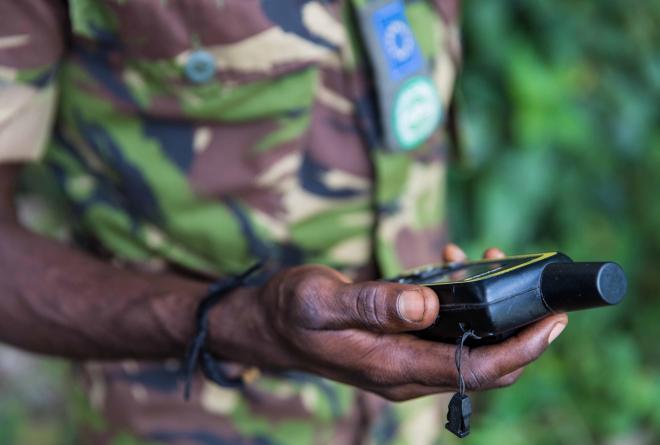 © Marcus Westberg
Capturing data is vital for effective protection of this park.

To better coordinate efforts to prevent poaching, the park formed its own Intelligence Unit, with members receiving six months training before deployment. The Unit’s three new analysts and five investigators have provided full operational coverage across the entire park and its periphery since June 2019.

Capturing live data is vital for effective protection of this expansive park. To that end, a new control room was also established in 2019, four operators were trained, and in collaboration with Vulcan Inc. an EarthRanger platform was set-up. This new technology aggregates and displays data including vehicle movements, ranger team locations, movements of collared animals, and illegal incidents.

Wildlife habits have changed completely since the introduction of effective law enforcement, particularly in the bais where rangers have carried out general habituation. Gradually animals have become used to the presence of humans without perceiving them as a threat, which is an essential part of developing the areas as potential tourism sites. In addition, patrols have resulted in a number of arrests and successful prosecutions.