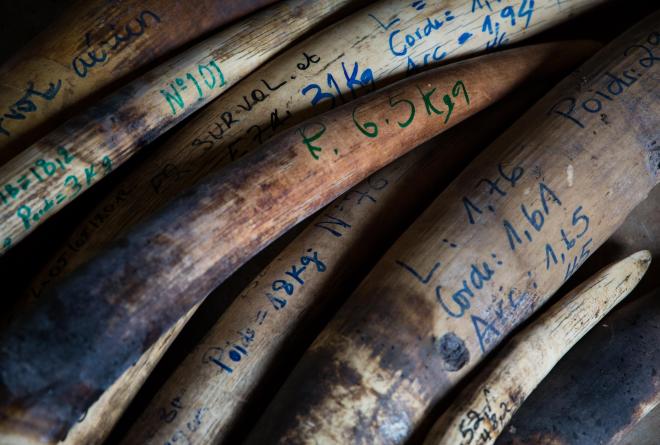 On the 5th of February 2019, a team of African Parks’ eco-guards from Odzala-Kokoua National Park and Congolese police officers seized 86 kilograms of ivory and apprehended six suspects in connection with trafficking the illicit wildlife products in Etoumbi (15 km south of the park). The successful operation was carried out collaboratively on information received the previous evening from the Project for the Application of Law for Fauna in the Republic of Congo (PALF).

The Brazzaville-based PALF contacted Odzala’s law enforcement team to initiate an immediate intervention in coordination with the Etoumbi local police and PALF’s legal experts. The following day, the park’s eco-guards, along with police officers, conducted an operation that led to the arrest of six suspects and the seizure of 41 pieces of ivory, corresponding to 21 elephants and totaling over 86 kilograms. The ivory had been concealed in large barrels and sacks of flour. Hearings will be held and the six complicit individuals will be prosecuted in the regional courts.

Large-scale poaching for ivory remains a major threat to forest elephants in Central Africa, where studies suggest numbers have declined by an estimated 66 percent between 2008 and 2016 across the transboundary landscape. Poaching is the primary threat to the elephant population in Odzala, which is part of the Tri-national Dja-Odzala-Minkebe (TRIDOM) transboundary conservation area.

Collaboration with the Government of the Republic of Congo, PALF and other organizations on the ground and local communities enables the success of operations like these which counter wildlife crime at the source of the illicit supply chain. African Parks is committed to working closely with the Government, communities and other partners to continue to secure Odzala and the livelihoods of those depending on it through progressive efforts to strengthen networks, monitoring systems, law enforcement and conservation-led development.