Odzala-Kokoua is one of the world’s remaining large intact forest systems and its biodiversity is nothing less than exceptional, with more than 440 bird species, it has been recognised as an Important Bird Area by Birdlife International. It is also home to over 100 mammal species and in excess of 10,000 plant species.

Odzala-Kokoua is one of the most botanically diverse areas in the world, with more than 4,400 plant species recorded, including distinctive groves of Senegal date palm which are dotted along the Mambili River banks. The southern part of the park is predominantly savannah-forest mosaic and forest galley ecosystem. The centre is dominated by Marantaceae forest, while further north, the park is covered by primary rain forest. Natural forest clearings, called ‘bais’ provide opportunities to observe wildlife more clearly than in the dense vegetation of the tropical forest. The Ekoutou escarpment with its lichen forest, and Djoua swamp in the north-west of the park, remain some of the most remote areas in which only a few scientific expeditions have been conducted. 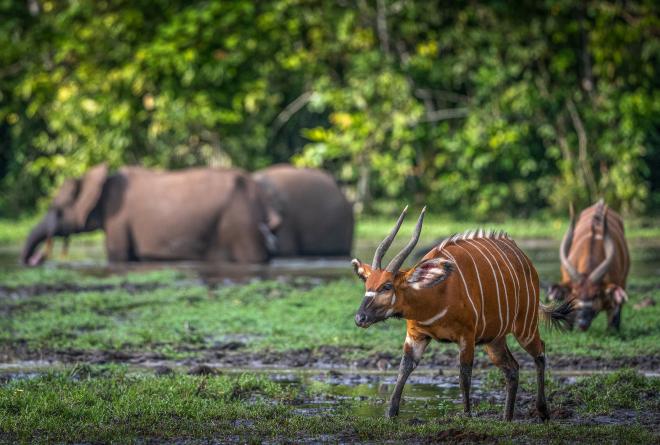 Odzala-Kokoua’s biodiversity is nothing less than exceptional, and is home to over 100 mammal species. While it is best known for its gorilla and chimpanzee populations, there are numerous other species resident in the park, including thousands of forest elephant, buffalo, and many antelope species.

Herbivores: Forest elephant and buffalo are found in the forests of Odzala, along with healthy populations of bongo antelope, sitatunga, bushbuck, giant forest hog and red river hog, numerous duiker species from the large yellow-backed duiker to the tiny Bates’s pygmy antelope and many others species, too numerous to mention.

Predators: Odzala is the only place in the region where spotted hyaena can still be found. The park is also home to the golden cat and serval.

Primate species: The western lowland gorilla and chimpanzee are amongst the most well-known, but other noteworthy primate species include the black and white colobus, and the rare to see De Brazza’s monkey and the agile mangabey. 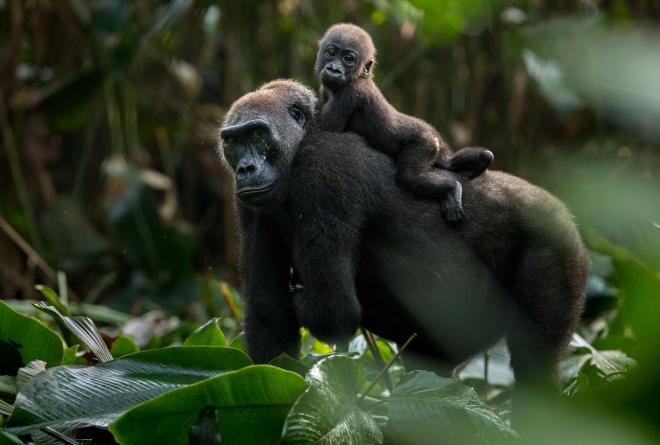 While the region’s protected areas support the largest forest elephant population in Central Africa, the species is under threat as a result of poaching pressure. Many elephants were killed before African Parks took over the management of Odzala-Kokoua, but effective law enforcement has resulted in many of the remaining individuals taking sanctuary in the park once again.

Gorilla numbers have also declined over the last decade due to diseases such as Ebola, as well as the illegal wildlife trade for pets and bushmeat. It is hoped that with the increased park security and the addition of the Lossi Gorilla Sanctuary, this downward trend can be reversed.