Nyungwe National Park is a birder’s paradise with around 300 species having been recorded, nearly 30 of which are Albertine Rift endemics. There are also 13 species classified as endangered, vulnerable, or near threatened by the IUCN. The thick vegetation makes finding birds more difficult, but the birder could be highly rewarded with rare species such as the Rwenzori turaco and Grauer’s swamp-warbler.

The Nyungwe forest has incredibly high wildlife diversity and endemism, making it a priority for conservation. A quarter of all of Africa’s primates, 13 species, can be found here, including the common chimpanzee and two Albertine Rift endemics, L’Hoest’s monkey (Cercopithecus l’hoesti) and Hamlyn’s monkey (Cercopithecus hamlyni). The Rwenzori colobus has been observed in a single group of 400 individuals, the largest ever recorded of any primate on the continent. 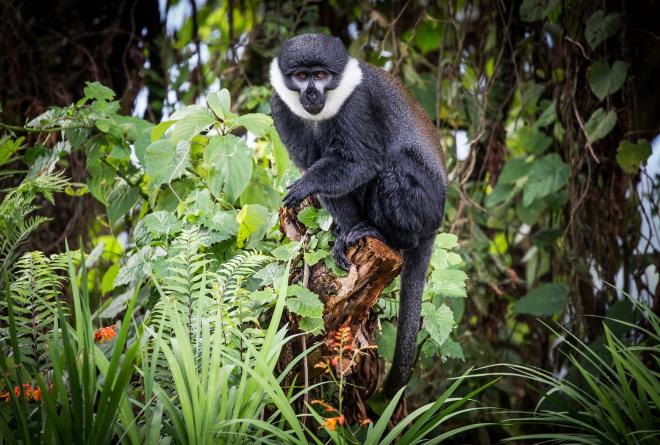 © Scott Ramsay
Nyungwe is home to 13 species of African primates.

Several mammal studies in the forest have resulted in a list of 96 species, of which 63 are rodents and bats. A total of 16 mammals are endemic. Eleven species are classified as threatened by the IUCN with a further five considered near threatened. There are also over 30 species each of amphibians and reptiles and at least 120 butterfly species.

Unsustainable levels of hunting and historical regional instability have resulted in the probable loss of several key species. Forest elephants and buffalo are confirmed locally extinct while leopard, golden cat, and giant forest hog are not thought to still remain in the park. However, given the challenges of research and observations in such a dense habitat, it is entirely possible that some species have been missed in previous studies and that some of these still exist in low densities. 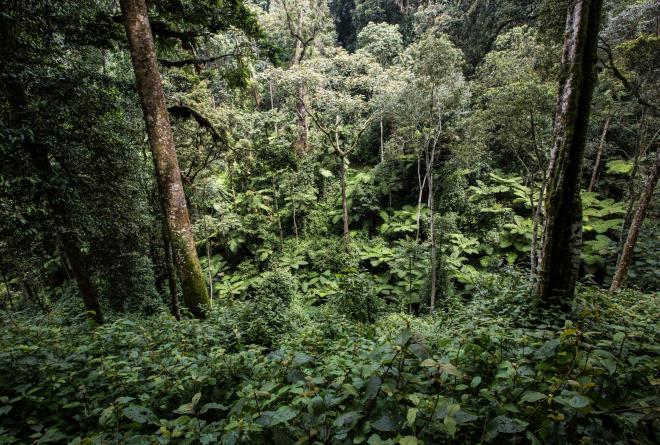 © Scott Ramsay
Nearly 1,100 species of plants have been recorded, of which 200 are trees.

The park encompasses the entirety of the Nyungwe forest, however there are also natural patches of savannah throughout the forest, allowing for even higher species diversity. The range in altitude from 1,900 to 3,000 m also shows changes in vegetation, ranging from tall trees, to ferns, to bamboo. Nearly 1,100 species of plants have been recorded, of which 200 are trees and 140 are orchids. This unique landscape has also produced an extreme level of endemism among plants as well as animals, with more endemic species recorded here than any other forest in the region. Twenty one of the 24 plants endemic to the Albertine Rift region have been recorded in Nyungwe. There are also at least three species endemic to Nyungwe itself: Impatiens kagamei, Impatiens nyungwensis, and Begonia pulcherrima.