Nkhotakota’s adjacent communities are among the poorest in Malawi, and their unsustainable use of the reserve’s natural resources to support their livelihoods, prior to African Parks’ management, progressively led to the extinction, or severe depletion, of many key mammal species in the reserve. However, improved law enforcement efforts and Ranger training have seen a significant decrease in poaching over the last five years. In 2019 alone our team of 43 Rangers achieved a 24% decrease in poaching incidents compared to 2018. 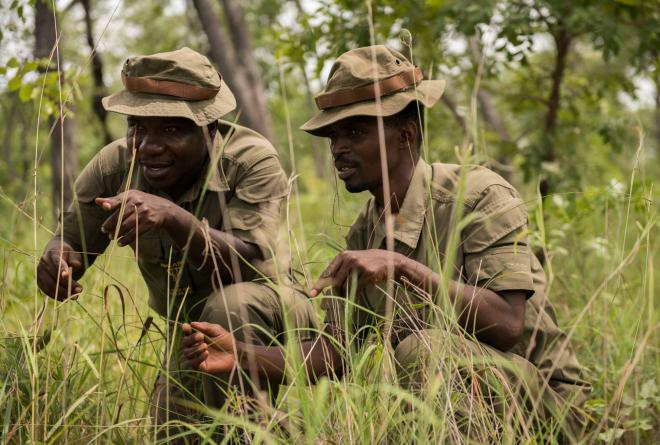 In 2015, when African Parks assumed management of the reserve, law enforcement was significantly bolstered in preparation for the 500 Elephant project and to account for the increased responsibility of managing animals at risk of poaching. Rangers received refresher training comprising of field tactics, patrol information, bushcraft, and weapons handling. Selected rangers also completed the Basic Field Ranger Training course.

This resulted in far more effective patrols, increased coverage of the reserve and improved morale. A helicopter programme was initiated and focused on airlifting law enforcement teams into remote areas of the reserve not previously covered by patrols. A new radio system greatly increased the scouts’ security and ability to coordinate activities; and all rangers received training in the use of smartphones and CyberTracker devices to collect valuable data on law enforcement, and illegal activities. In 2021, eleven new rangers joined our law enforcement team, bringing the total to 57. The reserve’s law enforcement strategy was refined and the results proved to be very effective, with a 50% reduction in illegal activity. The completion of Chipala Ranger Camp in the north west of the reserve significantly reduced poaching incidences in this area. No known elephants were poached in 2021, a first since our management commenced in 2015. Six years of accumulated effort combined with an increase in patrol coverage is beginning to show its worth, with fewer wire snares detected.