Liuwa is an excellent example of how parks can work together with communities in order to reduce illegal activities. Not only in terms of wildlife poaching and illegal fishing but also in terms of creating general law and order within the villages and towns in and around the park.

When African Parks assumed management of the park, poaching was rife, and zebra and wildebeest populations were declining. This was turned around by building up an effective law enforcement team and close collaboration with community leaders.

That being said, agricultural and rural sprawl inside the park remains a challenge. In particular, the expansion of rice fields and the deforestation of woodlands to create space for farming. African Parks is presently investigating mechanisms to mitigate this threat through improved agricultural yields and a revised land-use plan. Through the Jumpstart Project, various sustainability projects have been launched to assist the community to move towards more drought-resistant crops and conservation-compatible agriculture, which is already having a positive impact on food security.

African Parks’ standard approach is to take on existing law enforcement personnel when assuming management of a park, but then follow this with a thorough selection process to retain and further train those with potential. At Liuwa, this involved working in collaboration with DNPW, but also with village scouts who form the backbone of the law enforcement team in this park.

Because people live inside the park, it is important for the team to be able to differentiate between those who have the right to live and fish there, from those who do not and this is achieved through civilian law enforcement operations and the implementation of a permit system. 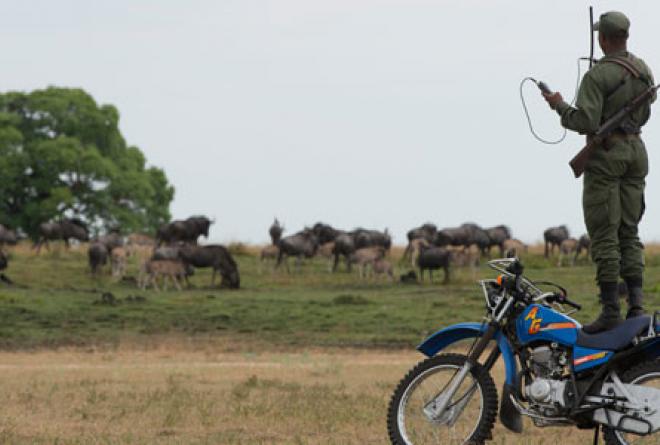 © Paul Goddard
Law enforcement are equipped with the tools to protect the park.

Protecting the vast expanse of Liuwa Plain, especially during the drought was not without its challenges, but our team persevered. Overall in 2019, Liuwa’s 67 rangers conducted 11,838 patrol man-days covering 50,041 km; they made 80 arrests, 23 were inside the park and 57 were outside which were done in collaboration with Wildlife Crime Prevention (WCP). A total of 25 animals were poached and all were game species. Seven pangolins were confiscated outside the park, six survived and were able to be released back into the wild.