Bound by the Luambimba and Luanginga rivers, Liuwa is characterised by its spectacular flat landscape with wide-open spaces. Its seasonally flooded Zambezi floodplain is dotted with slightly elevated wooded islands.

The park’s stable and growing wildebeest population of around 34,000 individuals migrate within the broader Liuwa system, moving between the numerous pans and following seasonal burns, most of which are anthropogenic in origin. They are joined by herds of zebra, tsessebe and lechwe, and predators such as wild dog, hyaena, cheetah, and lion. 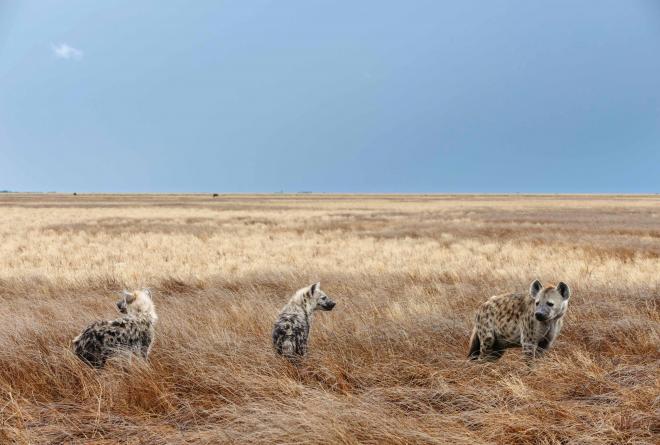 © Lorenz Fischer
The park has a large population of hyaena.

Predators: The park has a large population of hyaena, estimated at over 350 individuals, in the broader Liuwa landscape. In the absence of a significant lion population, the hyaenas rapidly ascended to the position of apex predator in the park. Other predator species include lion and cheetah. In 2019, two new groups of cheetahs were found, bringing the total population up to around 18 to 20 animals. The lion population of Liuwa, once reduced to one lioness, is slowly growing as a result of reintroductions and the birth of cubs.

Herbivores: Many species of antelope are flourishing in the park, including blue wildebeest, zebra, red lechwe, tsessebe, and buffalo.  In 2021, the annual aerial survey documented an increase of wildebeest from 31,956 to 34,752, and a stabilised zebra population of 4,027. 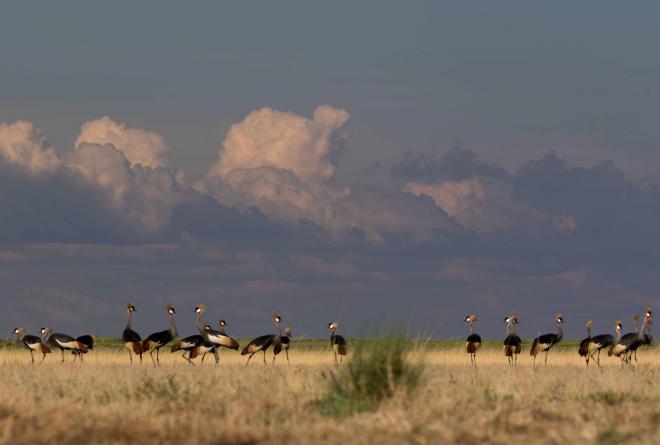 Over 350 bird species are resident in Liuwa or seasonal visitors. The park’s extraordinarily diverse birdlife includes many rare and migratory species, including globally important populations of storks, cranes and other water birds. The arrival of the annual floods marks the arrival of a wealth of water birds, and the vulnerable crowned crane and wattled crane are abundant, sometimes forming flocks numbering several hundred.

Grassland species include Eastern clapper lark and pink billed lark, with both of these species endemic to Liuwa.

In partnership with the Zambian Carnivore Programme, we have deployed collars on several animals which researchers monitor throughout the year. This enables their movements to be tracked and for important ecological information to be gathered. Animals with collars include cheetahs, spotted hyaenas, lions, and blue wildebeest. The park also conducts regular aerial censuses to track wildlife population growth. As a result, in 2021 fifteen cheetahs were monitored, of which two females produced cubs, but both litters died of natural causes. Seven of eight snared hyaenas were successfully released, and two new clans were fitted with satellite collars by the Zambian Carnivore Programme (ZCP), to better understand their movements. As a result, we received the first evidence of hyaena moving between the Greater Liuwa Ecosystem and Angola, proving the importance of corridors in the north-west of the park for gene flow.

Lady Liuwa was the park’s last remaining lioness when African Parks took over the management of the park in 2003. Her story was captured in an award-winning documentary, The Last Lioness, highlighting the demise of Liuwa’s once thriving lion population and documenting the introduction of two male lions. Unfortunately, she failed to produce any cubs, despite mating, so in mid-2011, African Parks made the decision to introduce two new young lionesses from Kafue National Park as part of a plan to create a breeding population of the species in Liuwa. While one of these lionesses was killed by a poacher, the other eventually went on to have three cubs – the first born in the park in over a decade. In 2017, African Parks successfully reintroduced an additional male lion to improve genetic diversity and two new cubs were confirmed (from the resident male). Sadly, Lady Liuwa passed away of natural causes in August 2017 but her legacy lives on in the healthy and growing pride of lions found in the park. In 2021, one old male lion was lost after wandering into Angola where his collar stopped transmitting, but a litter of three new cubs was born.